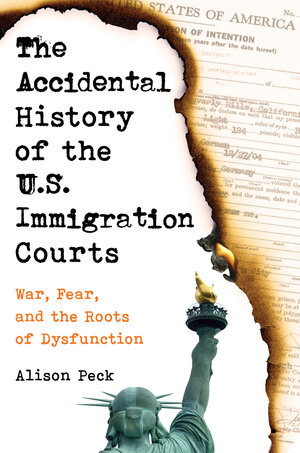 "Sometimes there are books that leave you much better for the experience. This is one of them. . . .  Alison Peck has filled a major gap, setting out a roadmap toward possible legislative alternatives to this unsatisfactory arrangement by offering the Title I Tax Court as a better option. If this is to happen, it will almost certainly have to be as a function of comprehensive immigration reform, a tantalizing oasis in the current political desert. If that happens, I will listen to her very carefully, as I did here."—Southwestern Historical Quarterly


"How did our immigration courts become part of our law enforcement apparatus—and what can we do about it? This pathbreaking book shows us both what is wrong with our current system of deciding immigration cases and how we can fix it. Important and eye-opening."—Kermit Roosevelt, Professor of Law, University of Pennsylvania Law School

"Alison Peck’s innovative history of the immigration courts teaches us that they were not designed to be neutral decision-makers. Political machinations led to their placement inside the Justice Department, so political outcomes are what we get. To free the immigration courts from political pressures, Peck argues, Congress must give them the independence they deserve."—César Cuauhtémoc García Hernández, author of Migrating to Prison: America’s Obsession with Locking Up Immigrants
Read More >