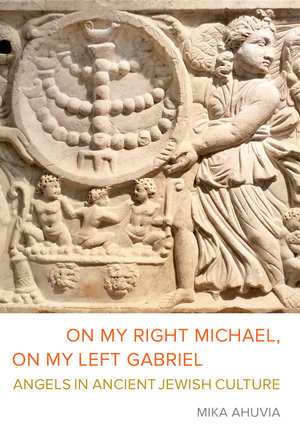 On My Right Michael, On My Left Gabriel Angels in Ancient Jewish Culture

Angelic beings can be found throughout the Hebrew Bible, and by late antiquity the archangels Michael and Gabriel were as familiar as the patriarchs and matriarchs, guardian angels were as present as one’s shadow, and praise of the seraphim was as sacred as the Shema prayer. Mika Ahuvia recovers once-commonplace beliefs about the divine realm and demonstrates that angels were foundational to ancient Judaism. Ancient Jewish practice centered on humans' relationships with invisible beings who acted as intermediaries, role models, and guardians. Drawing on non-canonical sources—incantation bowls, amulets, mystical texts, and liturgical poetry—Ahuvia shows that when ancient men and women sought access to divine aid, they turned not only to their rabbis or to God alone but often also to the angels. On My Right Michael, On My Left Gabriel spotlights these overlooked stories, interactions, and rituals, offering a new entry point to the history of Judaism and the wider ancient Mediterranean and Near Eastern world in which it flourished.

Mika Ahuvia is Assistant Professor of Classical Judaism at the Stroum Center for Jewish Studies in the Henry M. Jackson School of International Studies at the University of Washington, Seattle.

"Moving deftly across the full gamut of Jewish sources from late antiquity—from rabbinic literature to synagogue liturgy to magical and mystical texts—Mika Ahuvia demonstrates that angels, as objects of speculation and veneration as well as agentive entities in their own right, stand at the very core of Judaism as a religious tradition. This magnificent study capitalizes on the diversity of approaches to angels within the textual and material record in order to map the dynamic interaction among the various types of Jewish religious knowledge and expertise in this formative period."—Ra‘anan Boustan, Research Scholar, Program in Judaic Studies, Princeton University