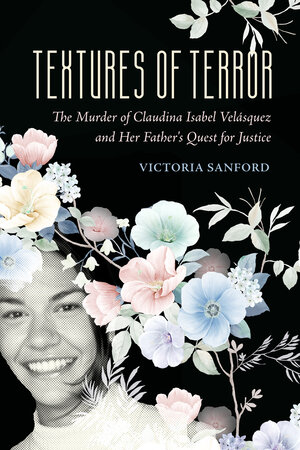 Investigating the unsolved murder of a female law student and the pervasive violence against Guatemalan women that drives migration.

Part memoir and part forensic investigation, Textures of Terror is a gripping first-person story of women, violence, and migration out of Guatemala—and how the United States is implicated. Accompanying Jorge Velásquez in a years-long search for answers after the brutal murder of his daughter Claudina Isabel, Victoria Sanford explores what it means to seek justice in "postconflict" countries where violence never ended.

Through this father's determined struggle and other stories of justice denied, Textures of Terror offers a deeper understanding of US policies in Latin America and their ripple effect on migration. Sanford offers an up-close appraisal of the inner workings of the Guatemalan criminal justice system and how it maintains inequality, patriarchy, and impunity. Presenting the stories of other women who have suffered at the hands of strangers, intimate partners, and the security forces, this work reveals the deeply gendered nature of power and violence in Guatemala.

Victoria Sanford is a John Simon Guggenheim Fellow and Professor of Anthropology, City University of New York. She has given expert testimony on the Guatemalan genocide in international courts and authored seven books, including Buried Secrets: Truth and Human Rights in Guatemala.

"In Textures of Terror, Victoria Sanford brilliantly unravels complex and widespread gender-based violence in Guatemala and how the very institutions created to combat it perpetuate violence and impunity. Above all, she tells the love story of a father's ceaseless quest for justice for the murder of his beloved daughter."—Kerry Kennedy, President of Robert F. Kennedy Human Rights

"How can anyone convey Guatemala's descent into ultra-violence following a US-backed coup decades ago? Sanford does it beautifully by telling a single poignant story and placing it against the country's dazzling political and cultural background. Harrowing but deeply insightful, Textures of Terror shows how ordinary people react and resist as a society decomposes."—Stephen Kinzer, Senior Fellow, Watson Institute for International and Public Affairs at Brown University, and world affairs columnist for the Boston Globe

"This book is simultaneously one book and many. One chronicles the murder of a young female law student. The others explore the layers of systemic horror that remind us that to be a woman in twenty-first-century Guatemala is to live in danger, in the shadow of violence, impunity, and historical oppression."—Carolina Escobar Sarti, National Director, La Alianza Guatemala

"In Textures of Terror, Sanford illuminates the way violence and impunity continue to destroy lives, especially women's lives, in postwar Guatemala. She focuses on the 2005 feminicide of Claudina Isabel and her father's efforts to bring the perpetrators to justice, weaving a story rooted in Guatemalan history, but with universal resonance."—Jo-Marie Burt, Associate Professor, Schar School of Policy and Government, George Mason University