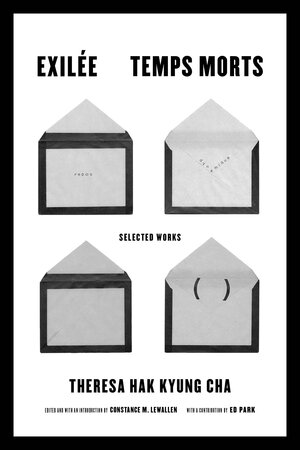 In her radical exploration of cultural and personal identity, the writer and artist Theresa Hak Kyung Cha sought “the roots of language before it is born on the tip of the tongue.” Her first book, the highly original postmodern text Dictee, is now an internationally studied work of autobiography. This volume, spanning the period between 1976 and 1982, brings together Cha’s previously uncollected writings and text-based pieces with images. Exilee and Temps Morts are two related poem sequences that explore themes of language, memory, displacement, and alienation—issues that continue to resonate with artists today. Back in print with a new cover, this stunning selection of Cha’s works gives readers a fuller view of a major figure in late twentieth-century art.

For the Fall 2022 season, UC Press will publish the restored edition of Dictee by Theresa Hak Kyung Cha and a reissue of Cha’s Exilee and Temps Morts: Selected Works edited by …

Theresa Hak Kyung Cha (1951–1982) was a poet, filmmaker, and artist who earned her BA and MA in comparative literature and her BA and MFA in art from the University of California, Berkeley.

Constance M. Lewallen is Adjunct Curator at the Berkeley Art Museum and Pacific Film Archive. Among her books are A Rose Has No Teeth: Bruce Nauman in the 1960s and The Dream of the Audience: Theresa Hak Kyung Cha (1951–1982).

"There is a deep pleasure to be found in attending to Cha’s intricate, ever inventive use of sound, punctuation, form, and syntax. It’s painful to think of what else Cha would have done if her life hadn’t been curtailed. Her existing work is so original and wide-ranging that reading it feels like emerging from a tangle into an open glade. What’s here is both not enough and a plenitude."—New Yorker

“Cha is a thoroughly detail-oriented literary and visual artist. Her methodical work doesn't entertain or dazzle. It is open-ended in a way that requires its audience to supply part of the vision.”—Jana Hsu San Francisco Bay Guardian

“The volume brings to light part of Cha’s achievement . . . Tantalizing.”—Bookforum

“Those interested in this work may be limited to fans of experimental and avant-garde literature and art.”—Library Journal

"Mastery over language that was borrowed, that was not her mother tongue, enabled Theresa Hak Kyung Cha to empathize with her viewer (her distant audience) as powerfully as any artist I know. In Exilee and Temps Morts I listen with fascination as her tongue exercises furtively and nimbly, convincing me that Cha would have been the exemplary artist of identity had she lived another ten years."—Byron Kim, artist


"Conceptual, poetic, visual, the writings of Theresa Hak Kyung Cha are radical and subtle responses to the artistic context of their time and reveal powerful areas of exploration to readers. Like few other contemporary collections, this book opens up new horizons in literature, art history, film theory, and linguistics, emphasizing the originality of a unique body of work that belongs both to history and to the present."—Elvan Zabunyan, author of Black Is a Color

"Since its publication within weeks of her premature death, Theresa Hak Kyung Cha's Dictée has attracted academic, feminist, literary, and cult followings. But despite the passion that erupts through its surface, it is in many ways an austere book. It withholds something—and purposefully so. This unexpected new collection of Cha's other, previously uncollected writings/inscribings offers something gentler, more intimate—and, though not less alienated, perhaps, the Cha we encounter in Exilee and Temps Morts is more playful. The works collected here resonate with vivacity and the luminous presence that was, and remains, Theresa Hak Kyung Cha."—Lyn Hejinian, author of A Border Comedy
Read More >