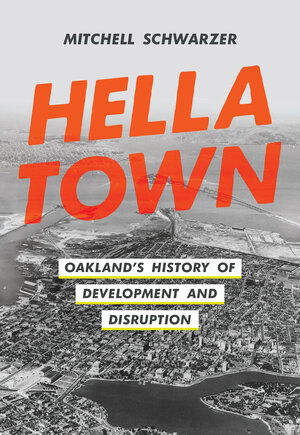 Often overshadowed by San Francisco, its larger and more glamorous twin, Oakland has a fascinating history of its own. From serving as a major transportation hub to forging a dynamic manufacturing sector, by the mid-twentieth century Oakland had become the urban center of the East Bay. Hella Town focuses on how political deals, economic schemes, and technological innovations fueled this emergence but also seeded the city’s postwar struggles.

Toward the turn of the millennium, as immigration from Latin America and East Asia increased, Oakland became one of the most diverse cities in the country. The city still grapples with the consequences of uneven class- and race-based development-amid-disruption. How do past decisions about where to locate highways or public transit, urban renewal districts or civic venues, parks or shopping centers, influence how Oaklanders live today? A history of Oakland’s buildings and landscapes, its booms and its busts, provides insight into its current conditions: an influx of new residents and businesses, skyrocketing housing costs, and a lingering chasm between the haves and have-nots.

By Mitchell Schwarzer, author of Hella Town: Oakland’s History of Development and Disruption It was the spring of 1964 and the sea air caressed my face as my father drove us along …

“Schwarzer’s biography of Oakland is a big book, an important book, a powerful book and an indispensable guide for anyone who wants to reform the city by any means necessary.”—CounterPunch

"Noteworthy for several reasons, but one is its timeliness. Though Hella Town tells a familiar story — Oakland’s rise as an industrial hub, its fall to the failings of racism, its still-troubled resurgence — the lens through which it makes sense of that story provides insights about how cities come to be (and why they fail) that prove eerily relevant to those writing Oakland’s next act right now. . . . All who want Oakland’s story to read, ultimately, as something other than tragic — more a celebration of all that makes this place uniquely great — should be aware of what building big things (or not building them) can do. Among other things, Hella Town is an excellent education to that end."—San Francisco Chronicle

"A sparkling new history filled with lessons for our present."—SF Weekly

"A model history of urban development, laying out the stages of ‘Oakland’s built environment' from its take-off in the last decade of the nineteenth century to the early years of the current century."—Geography Realm

"From malls to shipyards to housing in the hills, Mitchell Schwarzer’s book is a sweeping history of development and power." ?—Oaklandside

"The book will likely stir interest among faculty, students, and practitioners in urban planning and design, architecture, and urban history. Readers longing for a heavily descriptive account of Oakland’s urbanization will admire the extent to which the narrative offers a factual extravaganza of the components of the city’s built environment."—Journal of Urban Affairs

"Maintains a delicate balance between analyzing how Oakland’s history represents attributes common to many US cities while preserving distinctive characteristics. . . .  Hella Town is an urban history well worth the attention of scholars concerned with the 20th-century American city and of a wider audience interested in the San Francisco Bay Area."

"Thoroughly documenting Oakland’s struggles over the past 130 years, the book frames each issue or struggle within its political context. The writing is clear, accessible, and rich, and the maps and photos, some of them by the author, are outstanding."—California History

"Mitchell Schwarzer provides an engaging and comprehensive history of Oakland’s built environment. Meticulously researched, Hella Town examines the forces that shaped the city’s landscape and exposes the structural racism that created and maintained the societal inequities that persist today. The book is a must-read for anyone seeking to better understand this fascinating city."—Libby Schaaf, Mayor of Oakland

"Hella Town ambitiously and thoughtfully tells Oakland’s history from its cycles of expansion and industrialization to its current landscape of technology startups and gentrifying neighborhoods alongside trenchant poverty and homelessness. It is a must-read for those who want to understand how American cities get built and unbuilt."—Mabel O. Wilson, Professor, Columbia University

"An absolutely first-rate work that fills a huge gap in our history. While Silicon Valley rules the internet, San Francisco is world-renowned, and Berkeley symbolizes American radicalism, Oakland is regularly overlooked. This great city deserves its day in the sun for being, again and again, the most dynamic, fascinating, and tragic part of the Bay Area."—Richard Walker, author of Pictures of a Gone City: Tech and the Dark Side of Prosperity in the San Francisco Bay Area

"Mitchell Schwarzer’s Hella Town reads like a virtual roadmap through the complex web of discriminatory practices, policy, shortsightedness and greed that got us into the dual housing and identity crises we find ourselves in today. Will the people and the spirit that made the Bay, the Bay, be driven out along the fault lines of inequity, or will the land between the redwoods and the water prove just how resilient the spirit of the Town really is? My money is on the Town."—Rafael Casal, actor and co-creator of Blindspotting

Part III
6. The Promise and the Reality of Freeways and BART
7. In the Wake of Deindustrialization
8. Housing Injustice
9. Downtown Renewal and Ruin
10. Shopping Centers and Storefront Streets