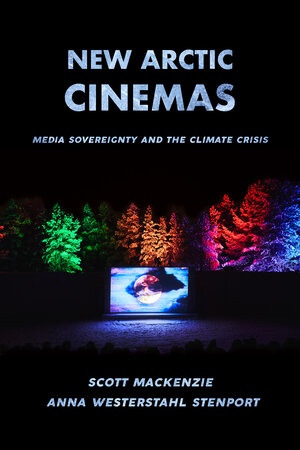 For centuries, the Arctic was visualized as an unchanging, stable, and rigidly alien landscape, existing outside twenty-first-century globalization. It is now impossible to ignore the ways the climate crisis, expanding resource extraction, and Indigenous political mobilization in the circumpolar North are constituent parts of the global present. New Arctic Cinemas presents an original, comparative, and interventionist historiography of film and media in twenty-first-century Scandinavia, Greenland, Russia, Canada, and the United States to situate Arctic media in the place it rightfully deserves to occupy: as central to global environmental concerns and Indigenous media sovereignty and self-determination movements. The works of contemporary Arctic filmmakers, from Zacharias Kunuk and Alethea Arnaquq-Baril to Amanda Kernell and Inuk Silis Høegh, reach worldwide audiences. In examining the reach and influence of these artists and their work, Scott MacKenzie and Anna Westerstahl Stenport reveal a global media system of intertwined production contexts, circulation opportunities, and imaginaries—all centering the Arctic North.

Scott MacKenzie is Professor and Head of the Department of Film and Media at Queen's University. Anna Westerstahl Stenport is Professor of Communication and Dean of the College of Liberal Arts at Rochester Institute of Technology. They are coeditors of Films on Ice: Cinemas of the Arctic and, with Lilya Kaganovsky, Arctic Cinemas and the Documentary Ethos.

"New Arctic Cinemas is a stunning and essential book, situating the Arctic and its representations as central to global media systems as well as global environmental concerns. Scott MacKenzie and Anna Stenport have followed the work created by Indigenous media makers from Nunavut in Canada, Sápmi across the Nordic countries, Greenland, Iñupiat lands in Alaska, and Russia's Far North. This wide-ranging, multidisciplinary book attends to both the exciting on-screen aesthetics and the lively off-screen innovations that have made media sovereignty possible for the First Nations people who have created this crucial if underrecognized domain of world cinema."—Faye Ginsburg, David B. Kriser Professor of Anthropology and Director of the Center for Media, Culture and History, New York University

"This is an extraordinary, important book. Marshaling the latest and greatest theoretical hits with significant new empirical research, MacKenzie and Stenport offer a tour de force of site and cinema that fascinates and troubles in equal measure. Required reading for media studies, national cinemas, Arctic research, and climate humanities."—Toby Miller, Professor Emeritus of Media and Cultural Studies and Professor of the Graduate Division, University of California, Riverside

"The Arctic has always been a screen. The West projected fantasies of heroism, emptiness, wilderness, and terror onto the last frontier of the age of exploration. MacKenzie and Stenport show another Arctic—one of Indigenous habitation and struggle that projects back an alternative cinema, an alternative world."—Sean Cubitt, Professor of Screen Studies, University of Melbourne


"New Arctic Cinemas is a triumphant scholarly achievement that profoundly reforms our understanding of cinema from, about, or set in the northern polar region. Adopting an array of novel approaches such as interventionist historiography and gendered Indigenous analysis, MacKenzie and Stenport present a rich, pan-Arctic library of films, thereby decentering conventional heroic explorer trails and claiming global centrality for the huge volume of high-quality art and blockbuster film of the Arctic rim."—Sverker Sörlin, Professor of Science, Technology and Environment, KTH Royal Institute of Technology, Stockholm

"Taking its cue from Far North Indigenous knowledge, New Arctic Cinemas relates Arctic production cultures to the history of forced removal, the fight for rights and reconciliation, and the uneven impacts of global warming and melting ice. The book's voice is strong and original, the prose eminently readable. A deeply meaningful work."—Janet Walker, Professor of Film and Media Studies, University of California, Santa Barbara

"MacKenzie and Stenport's groundbreaking book examines twenty-first-century films about the Arctic and the anxieties surrounding global warming, resource extraction, environmental change, and geopolitics. New Arctic Cinemas uses a transnational and comparative framework, crossing the boundaries of different ethnic and national identities, as well as cinema and media, to engage more broadly with the idea of the circumpolar North. This work is entirely new; it collects an archive of images of the Arctic that have never been brought together before and places them into an original aesthetic, political, ideological, and technological architecture."—Lilya Kaganovsky, Professor of Slavic, East European and Eurasian Languages and Cultures, University of California, Los Angeles