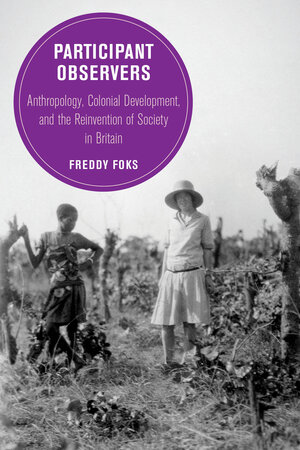 Participant Observers Anthropology, Colonial Development, and the Reinvention of Society in Britain

Social anthropology was at the forefront of debates about culture, society, and economic development in the British Empire. This book explores the discipline's rise in the interwar period, crisis amid decolonization, and ironic reemergence in the postwar metropole. Across the humanities and social sciences, activists and scholars used anthropological concepts forged in empire to rethink British society at midcentury. Participant Observers shows how colonial anthropology helped define the social imagination of postimperial Britain. Part institutional history of the discipline's formation, part cultural history of its impact, this is the first account of social anthropology's pivotal role in Britain's intellectual culture.

Freddy Foks is Simon Research Fellow at the University of Manchester. He is a historian of modern Britain and its empire.

"Freddy Foks strips away the mythic glow that clings to figures like Malinowski and Evans-Pritchard even today, not by villainizing them or crudely debunking their work but by contextualizing and historicizing them more effectively than has ever been done before. While restoring the essential weirdness of British social anthropology, he also manages to show how the field achieved immense and enduring influence across disciplinary and geographic boundaries."—Erik Linstrum, author of Ruling Minds: Psychology in the British Empire

"Participant Observers is an authoritative account of the development of British anthropology during the first half of the 20th century, emphasizing the formative role it played in shaping wider currents of thought and underscoring its significance for the development of social science."—Mike Savage, author of The Return of Inequality: Social Change and the Weight of the Past

"This book recounts how 'social' anthropology acquired its spots and how it was disappeared just when its impact on the envisioning of society was at its height in postwar Britain. Many anthropologists historicize their own discipline, but if there were ever a case for a historian's history, this lateral—and strikingly original—account is it."—Marilyn Strathern, author of Relations: An Anthropological Account