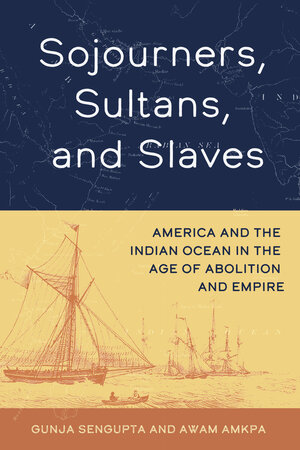 Sojourners, Sultans, and Slaves America and the Indian Ocean in the Age of Abolition and Empire

In the nineteenth century, global systems of capitalism and empire knit the North Atlantic and Indian Ocean worlds into international networks in contest over the meanings of slavery and freedom. Sojourners, Sultans, and Slaves mines multinational archives to illuminate the Atlantic reverberations of US mercantile projects, "free labor" experiments, and slaveholding in western Indian Ocean societies. Gunja SenGupta and Awam Amkpa profile transnational human rights campaigns. They show how the discourses of poverty, kinship, and care could be adapted to defend servitude in different parts of the world, revealing the tenuous boundaries that such discourses shared with liberal contractual notions of freedom. An intercontinental cast of empire builders and émigrés, slavers and reformers, a "cotton queen" and courtesans, and fugitive "slaves" and concubines populates the pages, fleshing out on a granular level the interface between the personal, domestic, and international politics of "slavery in the East" in the age of empire. By extending the transnational framework of US slavery and abolition histories beyond the Atlantic, Gunja SenGupta and Awam Amkpa recover vivid stories and prompt reflections on the comparative workings of subaltern agency.

Gunja SenGupta is Professor of History at Brooklyn College and the Graduate Center of the City University of New York. She is author of From Slavery to Poverty: The Racial Origins of Welfare in New York, 1840–1918.

Awam Amkpa is Professor of Drama and Social and Cultural Analysis at New York University and Dean of Arts and Humanities at NYU Abu Dhabi. He is author of Theater and Postcolonial Desires.