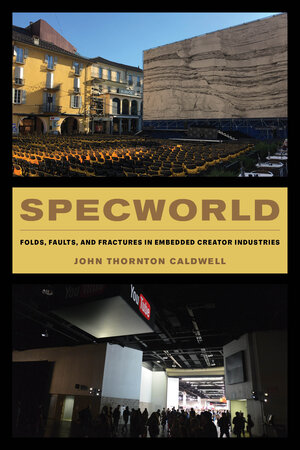 John Thornton Caldwell’s landmark Specworld demonstrates how twenty-first-century media industries monetize and industrialize creative labor at all levels of production. Through illuminating case studies and rich ethnography of colliding social-media and filmmaking practices, Caldwell takes readers into the world of production workshopping and trade mentoring to show media production as an untidy social construct rather than a unified, stable practice. This messy complex system, he argues, is full of discrete yet interconnected parts that include legacy production companies, marketers and influencers, aspirant online producers, data miners, financiers, talent agencies, and more. Caldwell peels away the layers of these embedded production systems to examine the folds, fault lines, and fractures that underlie a risky, high-pressure, and often exploitative industry. With insights on the ethical and human predicament faced by industry hopefuls and crossover creators seeking professional careers, Caldwell offers new interpretive frames and research methods that allow readers to better see the hidden and multifaceted financial logics and forms of labor embedded in contemporary media production industries.

John Thornton Caldwell is Distinguished Research Professor in Cinema and Media Studies at UCLA. A former NEA, Penn/Annenberg, and Bauhaus University Senior Fellow, Caldwell won the career 2018 Pedagogy Award from SCMS and the Best Experimental Documentary Prize from the 2020 DocLA Film Festival. He is the author of Production Culture: Industrial Reflexivity and Critical Practice in Film and Television and Televisuality: Style, Crisis, and Authority in American Television.

"Caldwell’s thoroughness and indefatigability are remarkable. His critiques of the status quo in cinema and media research and methodology are timely and on point. This kind of intervention is essential to both remapping the current field and outlining a way forward from here."—Victoria E. Johnson, Professor, Film and Media Studies and African American Studies, University of California, Irvine

"Hollywood has gone a long way from physical film and television production to today’s aspirational cultures of digital media and the twisted industrial system that manages and monetizes them. Drawing from decades of fieldwork, Caldwell provides the definitive account of this dynamic and a brilliant conceptual roadmap for future research."—Patrick Vonderau, coauthor of Spotify Teardown: Inside the Black Box of Streaming Music

"Specworld completes John Caldwell’s trilogy of landmark monographs examining the ways in which contemporary media conglomerates solicit, manage, and exploit creativity and creative labor. In an age of streaming video and social media, Caldwell focuses attention on the dispersed and protean 'contact zones' outside the studio gates that have become primary sites for what he refers to as the strip mining of creative endeavor. He provides both a critical template for grasping this ominous new mode of production and a clarion call for innovative research and teaching initiatives that respond to these disturbing new trends."—Michael Curtin, Distinguished Research Professor of Film and Media Studies, University of California Santa Barbara


"No one can get 'inside' production culture quite like John Caldwell. Specworld is a cutting-edge, insightful, and eminently engaging analysis of creative labor in the digital age, and a must-read for anyone who wants to study, understand or create content in a media ecosystem ruled by YouTube, Google, and Indiegogo. Moving effortlessly from theory to practice in compelling case studies, Caldwell unpacks the production process in an age of boundless speculation. In the process, he marks another crucial advance in the field of production studies."—Tom Schatz, Mrs. Mary Gibbs Jones Centennial Chair Emeritus in Communication, University of Texas at Austin

"In this important new book, John Caldwell offers a way to understand the industry as a messy complex system, full of discrete yet interconnected parts; he presents new interpretive frames and research methods that allow us to better see the varied forms of labor (and labor exploitation) entailed in this system."—Lynn B. Spigel, Frances Willard Professor of Screen Cultures, Northwestern University

"John Caldwell's incredibly innovative Specworld is a powerful example of what media scholarship on 'creator industries' can and should be in the 21st century. Anyone interested in pushing the boundaries of what counts as knowledge production (and asking newfangled questions about how to conduct interdisciplinary media-based research in humane and thoughtful ways) should pick up this impressive offering."—John L. Jackson, Jr., Walter H. Annenberg Dean of the Annenberg School for Communication at the University of Pennsylvania

"Following Production Culture, considered a ‘bible’ of critical production research, Specworld offers even more polemical and ethically engaged insights into the complexities of today’s media landscapes. Caldwell develops an ethnographically informed, paradigm-shifting framework for understanding the industry’s underbelly. More than a scholarly response to platformization, social media entertainment, and the #MeToo movement, Specworld is a beautifully written confession of an admired professor who cares deeply for the next generation of creators."—Petr Szczepanik, author of Screen Industries in East-Central Europe
Read More >