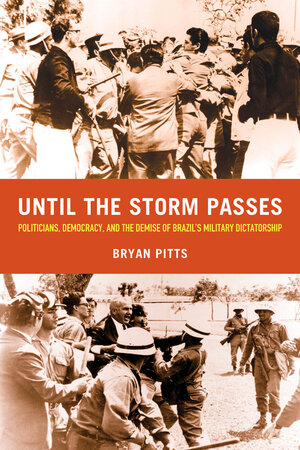 Until the Storm Passes Politicians, Democracy, and the Demise of Brazil’s Military Dictatorship

Until the Storm Passes reveals how Brazil's 1964–1985 military dictatorship contributed to its own demise by alienating the civilian political elites who initially helped bring it to power. Based on exhaustive research conducted in nearly twenty archives in five countries, as well as on oral histories with surviving politicians from the period, this book tells the surprising story of how the alternatingly self-interested and heroic resistance of the political class contributed decisively to Brazil's democratization. As they gradually turned against military rule, politicians began to embrace a political role for the masses that most of them would never have accepted in 1964, thus setting the stage for the breathtaking expansion of democracy that Brazil enjoyed over the next three decades.

Bryan Pitts is a historian and Assistant Director of the Latin American Institute at the University of California, Los Angeles.

"Until the Storm Passes is a timely and original addition to our understanding of the transition from military to democratic rule in Brazil. By providing an in-depth rereading of key political events during the dictatorship's final years, Bryan Pitts fills a gap in the existing scholarship by advancing a somewhat revisionist, important argument about the relevance of the political class in the country's recent history. It will prove essential to making sense of Brazil's recent democratic backsliding and the revived appeal of authoritarianism among its citizens and organized political groups."—Rafael R. Ioris, author of Transforming Brazil: A History of National Development in the Postwar Era

"In this remarkable study, Bryan Pitts shows how Brazil’s political class used notions of privilege and honor in order to navigate the spaces between the military dictatorship and popular movements. Through innovative research—including audio recordings of legislative proceedings made available to readers of this book—Until the Storm Passes skillfully captures the atmosphere of a pivotal moment in Brazilian history."—Jacob Blanc, author of Before the Flood: The Itaipu Dam and the Visibility of Rural Brazil