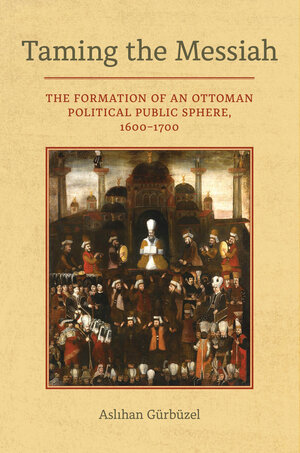 Taming the Messiah The Formation of an Ottoman Political Public Sphere, 1600–1700

In the history of the Ottoman Empire, the seventeenth century has often been considered an anomaly, characterized by political dissent and social conflict. In this book, Aslıhan Gürbüzel shows how the early modern period was, in fact, crucial to the formation of new kinds of political agency that challenged, negotiated with, and ultimately reshaped the Ottoman social order. By uncovering the histories of these new political voices and documenting the emergence of a robust public sphere, Gürbüzel challenges two common assumptions: first, that the ideal of public political participation originated in the West; and second, that civic culture was introduced only with Westernization efforts in the nineteenth century. Contrary to these assumptions, which measure the Ottoman world against an idealized European prototype, Taming the Messiah offers a new method of studying public political life by focusing on the variety of religious visions and lifeworlds native to Ottoman society and the ways in which they were appropriated and repurposed in the pursuit of new forms of civic engagement.

“In Taming the Messiah, Aslıhan Gürbüzel skillfully describes the emergence of a new public sphere in the seventeenth-century Ottoman Empire. An accomplished study of Ottoman politics and culture and a trenchant critique of Eurocentric notions, this book will appeal to Ottomanists and scholars working on other Islamic societies, as well as Europeanists who are interested in fresh perspectives on early modern public and political life.”—Kaya Şahin, Associate Professor of History and Director of the Islamic Studies Program, Indiana University Bloomington

“A major contribution to both Ottoman political history and Islamic studies. There is nothing comparable to this book in terms of demonstrating the impact of the political changes that took place in the seventeenth century on the political and religious idiom of the Ottoman Empire.”—Baki Tezcan, Professor of History, University of California, Davis

“Gürbüzel has produced a new narrative of the seventeenth century, one that puts the Sufi opponents of religious puritanism and sultanic absolutism at the center of the story. Her account is at the same time an intellectual history of Ottoman Sufism. The reader comes away with a vivid sense of the mystical theology that undergirded their critique.”—Molly Greene, Professor of History and Hellenic Studies, Princeton University


1. Politics as Spectacle: Changing Norms of Political Participation in the Seventeenth Century

3. Sufi Sovereignties in the Ottoman World: Sufi Orders as Dynasties

4. A New Volume for the Old Mesnevī: Reviving the Dual Caliphate in the Age of Decentralization

6. Of Coffeehouse Saints: Contesting Surveillance in the Early Modern City