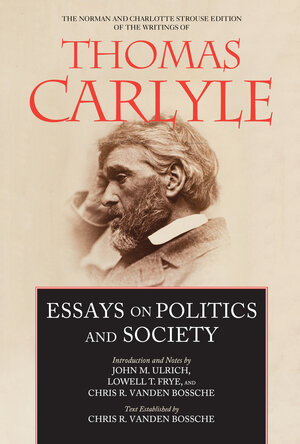 Essays on Politics and Society brings together the most significant writings on the topic by the acclaimed Victorian historian, social critic, and essayist Thomas Carlyle. This volume includes some of his most well-known and influential pieces, such as "Characteristics" and "Chartism." In keeping with the Norman and Charlotte Strouse Edition of the Writings of Thomas Carlyle, these essays are accompanied by a thorough historical introduction to the material, extensive notes providing historical and cultural context while expanding on references and allusions, and a textual apparatus that carefully details and explains the editorial decisions made in reconciling the editions of each essay.

Thomas Carlyle (1795–1881) was a renowned and prolific Scottish essayist, historian, and social critic. His other major works include Sartor Resartus, Heroes and Hero Worship, Past and Present, and his history of the French Revolution.

John M. Ulrich is Provost and Senior Vice President for Academic Affairs at Mansfield University and the author of Signs of Their Times: History, Labor, and Body in Cobbett, Carlyle, and Disraeli.

Lowell T. Frye is Elliott Professor Emeritus of Rhetoric and Humanities at Hampden-Sydney College and has published numerous articles on Thomas Carlyle, especially on the social and political essays and Latter-Day Pamphlets.

Chris R. Vanden Bossche is Professor Emeritus at the University of Notre Dame and the author of Carlyle and the Search for Authority and Reform Acts: Chartism, Social Agency, and the Victorian Novel, 1832–1867, editor of Carlyle's Historical Essays, and coeditor of Carlyle's Past and Present and Essays on Literature.

"Carlyle's essays 'on politics and society' are some of his most significant and widely read, especially 'Characteristics' and 'Chartism.' The supporting material surrounding the actual essays is extremely well done and constitutes a great deal of original and insightful content. Maintaining continuity with the early editions, the latest volume will prove to be one of the most popular not only for the specific essays but also for the elaborate apparatus the editors use to elucidate and situate those specific essays."—Rob Breton, Professor of English, Nipissing University, and author of The Oppositional Aesthetics of Chartist Fiction: Reading against the Middle-Class Novel

"This material is exhaustive and will be of inestimable use to future scholars of Carlyle, the vagaries of textual history, and nineteenth-century British publishing practices. This is meticulous and laborious work that was always likely to be done only once, and so I, at least, am pleased that it was completed here with such unflagging attention."—Albert Pionke, William and Margaret Going Endowed Professor of English, University of Alabama, and author of Teaching Later British Literature: A Thematic Approach

Essays on Politics and Society
Signs of the Times.
Characteristics.
Death of Edward Irving.
Petition on the Copyright Bill.
Chartism.
Dr. Francia.
Louis Philippe.
Repeal of the Union.
Ireland and the British Chief Governor.
Irish Regiments (of the New Æra).
Legislation for Ireland.
Death of Charles Buller.
Ireland and Sir Robert Peel.
Indian Meal.
Trees of Liberty.
The Opera.
Project of a National Exhibition of Scottish Portraits.
Ilias (Americana) in Nuce.
Inaugural Address
Shooting Niagara: And After?
Latter Stage of the French-German War, 1870-71.
The Portraits of John Knox