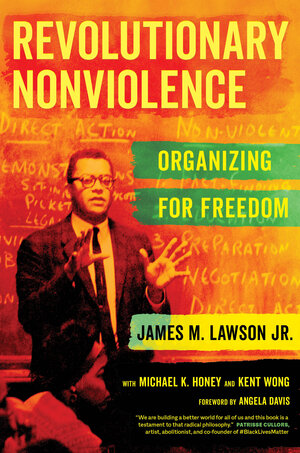 A persuasive account of the philosophy and power of nonviolence organizing, and a resource for building and sustaining effective social movements.

Despite the rich history of nonviolent philosophy, many people today are unfamiliar with the basic principles and practices of nonviolence––even as these concepts have guided so many direct-action movements to overturn forms of racial apartheid, military and police violence, and dictatorships around the world. Revolutionary Nonviolence is a crucial resource on the long history of nonviolent philosophy through the teachings of Rev. James M. Lawson Jr., one of the great practitioners of revolution through deliberate and sustained nonviolence. His ongoing work demonstrates how we can overcome violence and oppression through organized direct action, presenting a powerful roadmap for a new generation of activists.

Rev. Lawson’s work as a theologian, pastor, and social-change activist has inspired hope and liberation for more than sixty years. To hear and see him speak is to experience the power of the prophetic tradition in the African American and social gospel. In Revolutionary Nonviolence, Michael K. Honey and Kent Wong reflect on Rev. Lawson's talks and dialogues, from his speeches at the Nashville sit-in movement in 1960 to his lectures in the current UCLA curriculum. This volume provides a comprehensive introduction to Rev. Lawson's teachings on how to center nonviolence in successfully organizing for change.

James M. Lawson Jr. is a Methodist minister who taught nonviolent theory and practice to help launch the 1960s Nashville lunch counter sit-ins, the Freedom Rides, the Memphis sanitation strike, and worker and immigrant rights movements in Los Angeles. He continues to energize leaders and activists and inspire social change movements in the United States today.

Michael K. Honey is Haley Professor of Humanities at the University of Washington Tacoma. He is the author of five award-winning books on labor, the freedom movement, and Martin Luther King; the editor of King’s labor speeches; the past president of the Labor and Working-Class History Association; and a former civil liberties and community organizer in the South.

Kent Wong is director of the UCLA Labor Center, a union attorney, and a labor activist. He has taught a course on nonviolence with Rev. James Lawson Jr. for the past twenty years and has published books on the labor movement, immigrant rights, and the Asian American community.

Angela Y. Davis is a philosopher, antiracist, feminist scholar and activist, former political prisoner, and author of numerous pathbreaking studies. She is Distinguished Professor Emerita of the History of Consciousness and Feminist Studies at the University of California, Santa Cruz.

Bryan Stevenson is the founder of the Equal Justice Initiative and has won major legal cases before the US Supreme Court to challenge unfair and abusive treatment of the incarcerated. He has created nationally acclaimed cultural sites in Montgomery, Alabama, and is a professor at New York University School of Law.

"A ‘how to’ guide for the next generation."—Christian Science Monitor

"This book is both easy to read and deeply inspiring. It is among the best introductions to the philosophy of the nonviolent movement. . . . Highly recommended."—CHOICE

"Jim Lawson is a peerless teacher, beloved role model, and prophet of nonviolence who guided Dr. King and thousands of young leaders of all races and ages, including me, in seeking racial and economic justice. This essential collection of his visionary teaching is more necessary today than ever."—Marian Wright Edelman, founder and president emerita, Children's Defense Fund

"The United Farm Workers embraced the philosophy of nonviolence as did Rev. Martin Luther King Jr. and other leaders of the Civil Rights Movement who led powerful movements for justice through nonviolence. Revolutionary Nonviolence captures the unique, valuable teachings of Rev. James Lawson Jr. This is the handbook and guide to how to build a just and democratic society, and a must-read for all."—Dolores Huerta, cofounder of the United Farm Workers of America and president of the Dolores Huerta Foundation

"When Rev. Lawson taught nonviolence workshops for SCLC, Dr. King made a point of sitting in the front row and taking notes. What a gift to have this collection of Rev. Lawson's teachings as we continue to need the power of nonviolence to reconstruct a society that works for everyone. Take notes, and get ready to put these lessons into practice."—Bishop William J. Barber II, co-chair of the Poor People's Campaign and president of Repairers of the Breach


"Rev. Lawson's wisdom and legacy of resilience shine through in Revolutionary Nonviolence as he demonstrates that struggle with precision and persistence is a critical part of our theory of change in movement building. Rev. Lawson's liberatory theology and investment in nonviolent values and practice is a discipline that urges us to lean into one another's ability to learn together instead of disposing one another. Over the many years we have had the privilege to learn from him, he has taught us that the commitment to justice is the commitment we make to love, respect, and hold one another accountable to justice. We are building a better world for all of us, and this book is a testament to that radical philosophy."—Patrisse Cullors, artist, abolitionist, and cofounder of #BlackLivesMatter

"When I was first elected president of the Hotel Workers Union Local 11 in Los Angeles, Rev. Lawson taught us about the power of nonviolence. His teachings helped to transform hotel workers' lives, our union, and the Los Angeles labor movement. I will always cherish our friendship. I am confident this book will continue to inspire and guide generations to come on the connection between the philosophy of nonviolence and direct-action strategies."—Maria Elena Durazo, California State Senator
Read More >

1 The Power of Nonviolence in the Fight for Racial Justice

3 Steps of a Nonviolent Protest or Movement

4 Examples of Social Change through Nonviolence

5 Where Do We Go from Here?

6 You Have to Do the Truth Part First: A Dialogue between Rev. James M. Lawson Jr. and Bryan Stevenson