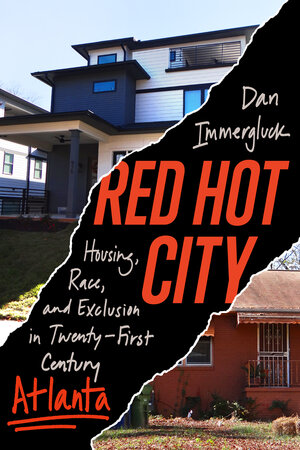 An incisive examination of how growth-at-all-costs planning and policy have exacerbated inequality and racial division in Atlanta.

Atlanta, the capital of the American South, is at the red-hot core of expansion, inequality, and political relevance. In recent decades, central Atlanta has experienced heavily racialized gentrification while the suburbs have become more diverse, with many affluent suburbs trying to push back against this diversity. Exploring the city’s past and future, Red Hot City tracks these racial and economic shifts and the politics and policies that produced them.

Dan Immergluck documents the trends that are inverting Atlanta’s late-twentieth-century “poor-in-the-core” urban model. New emphasis on capital-driven growth has excluded low-income people and families of color from the city’s center, pushing them to distant suburbs far from mass transit, large public hospitals, and other essential services. Revealing critical lessons for leaders, activists, and residents in cities around the world, Immergluck considers how planners and policymakers can reverse recent trends to create more socially equitable cities.

By Dan Immergluck, author of Red Hot City: Housing, Race, and Exclusion in Twenty-First-Century Atlanta Rising home prices and rents are on everyone’s mind these days. In the wake of COVID-19, housing …

"The inner city and the suburbs have flipped as low-income residents and people of color are being pushed farther out of Atlanta. Immergluck provides a look into past housing policies that have affected this outcome while also providing a path to a future of more equitable, livable cities."—Realtor Magazine Online

"In Red Hot City, Dan Immergluck shows us how the sausage is made—or rather, how a city is. This autopsy of Atlanta is many things at once: a study in urban inequality, an examination of how corporate and political elites shape our neighborhoods, a detailed blueprint of how cities become unaffordable, and an elegy for what could have been. This is an essential book for anyone who loves cities and seeks to make them more just and inclusive."—Matt Desmond, author of Evicted: Poverty and Profit in the American City

"Dan Immergluck, a leading scholar of housing inequality in the United States, is a crucial interlocutor for understanding the new, emergent trends in housing exclusion driven by gentrification, displacement, suburbanization, and changing economies. Immergluck shifts this familiar story from the nation’s largest cities to one of the hottest housing markets in the country. Using metropolitan Atlanta as a canvas, Red Hot City paints a jarring picture of deepening housing precarity and crisis—even amidst an ongoing economic boom. Rigorous, analytical, and urgent, Immergluck’s mapping of the meaning of systemic housing inequality provides the insights and intellect to fix the problems about which he so adroitly writes. If you want to understand the housing crisis that is gripping America, this is the book you must read."—Keeanga-Yamahtta Taylor, author of Race for Profit: How Banks and the Real Estate Industry Undermined Black Homeownership

“Red Hot City is a rightly disquieting book about twenty-first century Atlanta, an economically and demographically scintillating US city-region with powerful magnetism for markets and migrants but deeply anchored racial and class inequalities. Written with vim and packed with sound analysis, the book displays deep regard for the enduring potential of Atlanta—and all US cities—to be more than gullible marks for mindless growth and abettors of racial and class exclusion and injustices. It’s a powerful piece of urban political economy scholarship."—Michael Leo Owens, Professor, Department of Political Science, Emory University

"Red Hot City is the most thorough assessment of the political economy of Atlanta’s urban and regional growth and development in over twenty years."—Larry Keating, Professor Emeritus, School of City and Regional Planning, Georgia Tech University

"The scholarship and writing are excellent. Immergluck is a first-hand participant in many of the debates described in the book as well as an international expert on housing."—Edward G. Goetz, Professor of Urban and Regional Planning, University of Minnesota

"Dan Immergluck forces the reader to look at the raw and painful history of racist land use practices and their effect on vulnerable people and places in Metro Atlanta. Under the guise of 'Smart Growth' and 'New Urbanism,' government, corporate, and affluent interests have worked collectively to use fear, greed, and public policy as covert weapons of mass inequity. As opposed to serving as a beacon of light for inclusive growth, Immergluck makes us accept the ugly truth. The history and current condition of Atlanta and its suburbs must be studied as a cautionary tale of what happens when a region becomes too busy to care about its most vulnerable residents. One question stayed with me after reading Red Hot City: What if?"—Nathaniel Smith, President and Chief Equity Officer, Partnership for Southern Equity

"Steeped in the promise of the American Dream—life, liberty, and the pursuit of happiness—Immergluck offers a glimpse of Atlanta’s reality with this shining example of scholarship as a solution to one of the city’s most glaring problems. He shifts the narrative of civil and human rights from the more highbrow discussions of Atlanta’s civil rights lore, bringing it down to the lived experiences through trends and tensions of home ownership, public housing, and/or the lack thereof."—Maurice J. Hobson, author of The Legend of the Black Mecca: Politics and Class in the Making of Modern Atlanta 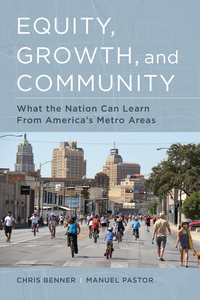