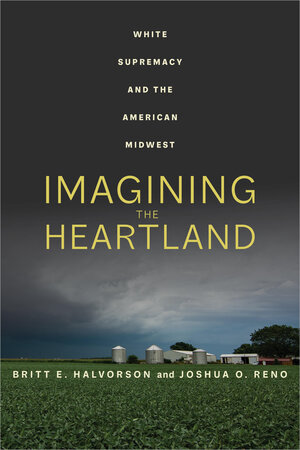 Imagining the Heartland White Supremacy and the American Midwest

An overdue examination of the Midwest's long influence on nationalism and white supremacy.

Though many associate racism with the regional legacy of the South, it is the Midwest that has upheld some of the nation’s most deep-seated convictions about the value of whiteness. From Jefferson’s noble farmer to The Wizard of Oz, imagining the Midwest has quietly gone hand-in-hand with imagining whiteness as desirable and virtuous. Since at least the U.S. Civil War, the imagined Midwest has served as a screen or canvas, projecting and absorbing tropes and values of virtuous whiteness and its opposite, white deplorability, with national and global significance. Imagining the Heartland provides a poignant and timely answer to how and why the Midwest has played this role in the American imagination.

In Imagining the Heartland, anthropologists Britt Halvorson and Josh Reno argue that there is an unexamined affinity between whiteness, Midwestness, and Americanness, anchored in their shared ordinary and homogenized qualities. These seemingly unremarkable qualities of the Midwest take work; they do not happen by default. Instead, creating successful representations of ordinary Midwestness, in both positive and negative senses, has required cultural expression through media ranging from Henry Ford’s assembly line to Grant Wood’s famous “American Gothic.” Far from being just another region among others, the Midwest is a political and affective logic in racial projects of global white supremacy. Neglecting the Midwest means neglecting the production of white supremacist imaginings at their most banal and at their most influential, their most locally situated and their most globally dispersed.

Britt E. Halvorson is Associate Professor of Anthropology at Colby College and author of Conversionary Sites: Transforming Medical Aid and Global Christianity from Madagascar to Minnesota.

Joshua O. Reno is Professor of Anthropology at Binghamton University and author of Waste Away: Working and Living with a North American Landfill and Military Waste: The Unexpected Consequences of Permanent War Readiness.

"The heartland isn’t a region. It’s a race. That’s the urgent lesson of Britt E. Halvorson and Joshua O. Reno’s Imagining the Heartland. The stories we tell about the Midwest––stories of blandness, averageness, of life in Lake Wobegon––inform who is seen as virtuous, normal, and American. In a time of sensational acts of white entitlement, Halvorson and Reno have written an absorbing book about how images of boring white folks secure white dominance." ––Joseph Darda, author of How White Men Won the Culture Wars: A History of Veteran America

"A wonderful interdisciplinary trek. Halvorson and Reno unpack the performative aspects of the Midwest not just to explore how the Midwest is represented in various genres and cultural works but to delve into what is being 'done' by the strategic invention of the Midwest as a quintessential White American landscape."—Sujey Vega, author of Latino Heartland: Of Borders and Belonging in the Midwest