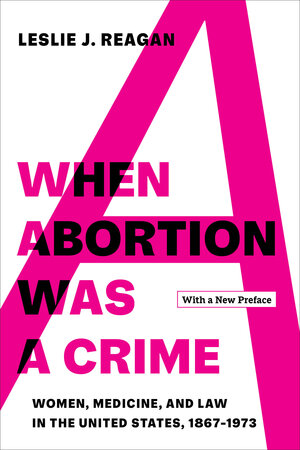 When Abortion Was a Crime Women, Medicine, and Law in the United States, 1867-1973, with a New Preface

The definitive history of abortion in the United States, with a new preface that equips readers for what’s to come.

When Abortion Was a Crime is the must-read book on abortion history. Originally published ahead of the thirtieth anniversary of Roe v. Wade, this award-winning study was the first to examine the entire period during which abortion was illegal in the United States, beginning in the mid-nineteenth century and ending with that monumental case in 1973. When Abortion Was a Crime is filled with intimate stories and nuanced analysis, demonstrating how abortion was criminalized and policed—and how millions of women sought abortions regardless of the law. With this edition, Leslie J. Reagan provides a new preface that addresses the dangerous and ongoing threats to abortion access across the country, and the precarity of our current moment.

While abortions have typically been portrayed as grim "back alley" operations, this deeply researched history confirms that many abortion providers—including physicians—practiced openly and safely, despite prohibitions by the state and the American Medical Association. Women could find cooperative and reliable practitioners; but prosecution, public humiliation, loss of privacy, and inferior medical care were a constant threat. Reagan's analysis of previously untapped sources, including inquest records and trial transcripts, shows the fragility of patient rights and raises provocative questions about the relationship between medicine and law. With the right to abortion increasingly under attack, this book remains the definitive history of abortion in the United States, offering vital lessons for every American concerned with health care, civil liberties, and personal and sexual freedom.

Leslie J. Reagan is Professor of History, Law, Gender and Women’s Studies, and Media Studies at the University of Illinois at Urbana-Champaign. Author of the award-winning Dangerous Pregnancies: Mothers, Disabilities, and Abortion in Modern America and public intellectual, Reagan has written for the Washington Post, Time, Ms. Magazine, and Huffington Post and has appeared on numerous national and international media outlets, including CNN, MSNBC, CBC Radio, and NPR. She is currently completing Toxic Legacies: Agent Orange in the United States and Vietnam.

"A first-rate exposition of the changing cultural and legal climate regarding abortion in America."—Thomas Szasz, The Washington Post

"A brilliant account of the era before the 1973 Roe vs. Wade Supreme Court decision. . . .A model of social history, supported by a spectacular wealth of documentary evidence. . . .This well-written book is a stellar, complex, and accessible volume that will stand as the definitive history for years to come."

"The first to span the whole period of criminalization and to cover the subject in such depth. . . .Important and original, vigorously written. . . .Rich, thought-provoking, and revelatory."—Katha Pollitt, The Atlantic

"For those who take abortion for granted, Reagan's work is an eye-opener."—Publishers Weekly

"Reagan brings a new perspective to the history of illegal abortion in the late 19th and early 20th centuries."—Jane Hodgson, Journal of the American Medical Association

"A first-rate exposition of the changing cultural and legal climate regarding abortion in America."—Washington Post


"For those who take abortion for granted, Reagan's work is an eye-opener."—Publishers Weekly

"This book is one of the most important books I have ever read. It has shaped my thinking about abortion and many other things in deep ways."—Katha Pollitt, contributor, The Nation

"Exploiting legal as well as medical records, Reagan has retrieved the history of women who struggled for reproductive autonomy and provides our best account of how the practice and policing of abortion evolved in relation to medicine, the state, and the condition of women. [This] is a major contribution to social history."—James W. Reed, Rutgers University

"This is a fascinating book—energetic, even urgent in its narrative. It is based on entirely new material, making ingenious and enlightening use of criminal trials, inquests, and newspaper accounts. Both creative and painstaking in her research, Reagan persuasively establishes historical patterns in the availability of assisted abortion and documents a striking antiabortion backlash in the 1940–50s. In addition to the book's value for scholars, it will undoubtedly be valuable to feminists, lawyers, doctors, and others interested in the conditions of abortion today."—Nancy Cott, Yale University
Read More > 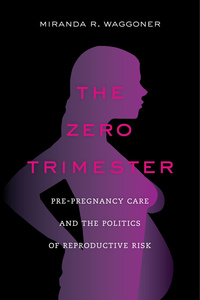