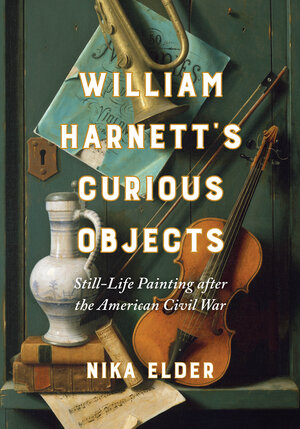 Admired for his trompe l’oeil style, American painter William Harnett (1848–1892) was as intellectually ambitious as he was technically skilled. The first scholarly monograph on the artist, William Harnett’s Curious Objects details Harnett’s career-long effort to position still life as a serious art.

Nika Elder elevates the significance of Harnett’s academic training and questions his apparent turn away from it. Reading his still lifes in relation to wartime visual culture, literary realism, museum display, and industrial design, she shows how Harnett experimented with inanimate objects and pictorial techniques to represent the human condition without depicting the human body. His paintings illustrate late nineteenth-century American material culture, but they also represent Reconstruction, interiority, death and life, and the imagination. By engaging such lofty themes, Harnett reimagined history painting for the modern era. His work thus locates Gilded Age art and culture in the long shadow of the Civil War and its politics.

"Bold and innovative, Nika Elder’s book does not only challenge how historians of American art think about the motivations for and meanings of still-life painting. It also changes our understanding of the relationship between fine art, social politics, and popular culture in the immediate wake of the US Civil War.”—Tanya Sheehan, William R. Kenan Jr. Professor of Art, Colby College

"In Nika Elder’s absorbing account, the great American still-life painter William Harnett grasped at objects like a drowning man at whatever floats nearby. In the wake of the Civil War, an artist wrongly characterized as a con man set out on a mission to find enduring human values. If it proved impossible, his clear-eyed investigation of last moments is all the more grave and impressive. Harnett’s failure is Elder’s triumph."—Alexander Nemerov, Carl and Marilynn Thoma Provostial Professor in the Arts and Humanities, Stanford University

Introduction: Harnett’s Objects
1. Civil War Relics and the End of History Painting
2. Text and the Transformation of Still Life
3. Specimens and the Art of Trompe l’Oeil
4. Manufactures and the Politics of Painting
Epilogue: Still Life and Its Afterlives