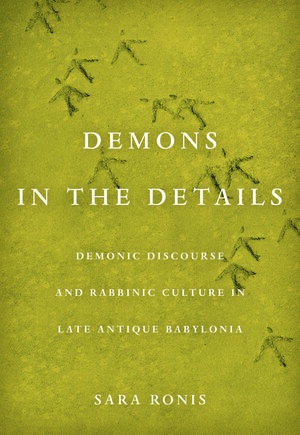 The Babylonian Talmud is full of stories of demonic encounters and laws that attempt to regulate those encounters. In this book, Sara Ronis takes the reader on a journey across the rabbinic canon, exploring how Late Antique rabbis imagined, feared, and controlled demons. Ronis contextualizes the Talmud's thought within the rich cultural matrix of Sasanian Babylonia, putting rabbinic thinking in conversation with Sumerian, Akkadian, Ugaritic, Syriac Christian, Zoroastrian, and Second Temple Jewish texts about demons to delve into the interactive communal context in which the rabbis created boundaries between the human and the supernatural, and between themselves and other religious communities. Demons in the Details explores the wide range of approaches that the rabbis took to their neighbors' beliefs and practices, out of which they created a profoundly Jewish demonology.

"This is a well-researched and much-needed project that contributes tremendously to our understanding of rabbinic culture and how it fits into its surrounding and preceding cultures. In it, Sara Ronis compares demons in the Babylonian Talmud to their near and distant relatives throughout Mesopotamia and the Mediterranean. If you thought all demons were alike or all societies related to demons in the same way, this book will be an eye-opener."—David Brodsky, Chair, Department of Judaic Studies, Brooklyn College, CUNY