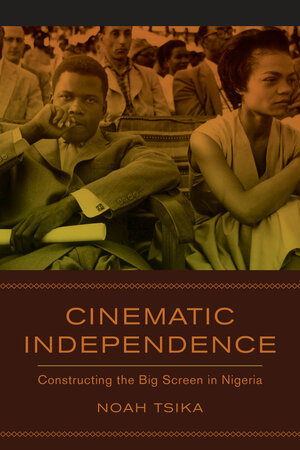 Cinematic Independence traces the emergence, demise, and rebirth of big-screen film exhibition in Nigeria. Film companies flocked to Nigeria in the years following independence, beginning a long history of interventions by Hollywood and corporate America. The 1980s and 1990s saw a shuttering of cinemas, which were almost entirely replaced by television and direct-to-video movies. However, after 1999, the exhibition sector was revitalized with the construction of multiplexes. Cinematic Independence is about the periods that straddle this disappearing act: the immediate decades bracketing independence in 1960, and the years after 1999. At stake is the Nigerian postcolony’s role in global debates about the future of the movie theater. That it was eventually resurrected in the flashy form of the multiplex is not simply an achievement of commercial real estate, but also a testament to cinema’s persistence—its capacity to stave off annihilation or, in this case, come back from the dead.

Noah Tsika is Associate Professor of Media Studies at Queens College, City University of New York. He is contributing editor of Africa Is a Country and the author of several books, including Traumatic Imprints and Nollywood Stars.

"Expansive in its historical coverage and rigorous in its analyses, Cinematic Independence is remarkable for its incalculable insights and revelations into Nigeria’s colonial media history and the ruthless workings of American capitalism."—Paul Ugor, author of Nollywood: Popular Culture and Narratives of Youth Struggles in Nigeria

"Offers a panoramic view of theatrical exhibition in Nigeria and a major contribution to our understanding of a previously overlooked, imbricated history involving both Hollywood and what we now know as Nollywood."—Moradewun Adejunmobi, Professor of African American and African Studies, University of California, Davis