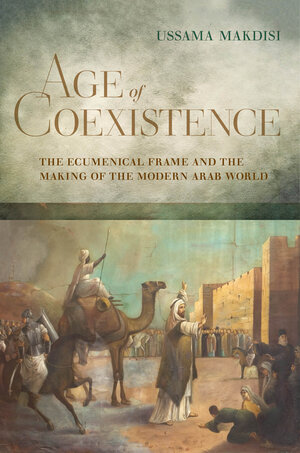 "Flawless . . . [Makdisi] reminds us of the critical declarations of secularism which existed in the history of the Middle East."—Robert Fisk, The Independent

Today’s headlines paint the Middle East as a collection of war-torn countries and extremist groups consumed by sectarian rage. Ussama Makdisi’s Age of Coexistence reveals a hidden and hopeful story that counters this clichéd portrayal. It shows how a region rich with ethnic and religious diversity created a modern culture of coexistence amid Ottoman reformation, European colonialism, and the emergence of nationalism.

Moving from the nineteenth century to the present, this groundbreaking book explores, without denial or equivocation, the politics of pluralism during the Ottoman Empire and in the post-Ottoman Arab world. Rather than judging the Arab world as a place of age-old sectarian animosities, Age of Coexistence describes the forging of a complex system of coexistence, what Makdisi calls the “ecumenical frame.” He argues that new forms of antisectarian politics, and some of the most important examples of Muslim-Christian political collaboration, crystallized to make and define the modern Arab world.

Despite massive challenges and setbacks, and despite the persistence of colonialism and authoritarianism, this framework for coexistence has endured for nearly a century. It is a reminder that religious diversity does not automatically lead to sectarianism. Instead, as Makdisi demonstrates, people of different faiths, but not necessarily of different political outlooks, have consistently tried to build modern societies that transcend religious and sectarian differences.

Ussama Makdisi is Professor of History and the first Arab-American Educational Foundation Chair of Arab Studies at Rice University. He is the author of The Culture of Sectarianism, Artillery of Heaven, and Faith Misplaced.

"This book is a must read for anyone interested in the Middle East’s present and who might be hopeful for the region’s future."—Middle East Journal

"Seeking to counter contemporary perceptions of the Middle East as a region riven by sectarian strife, Makdisi examines the ‘culture of coexistence’ which he believes prevailed in the Ottoman Empire and in the post-Ottoman Arab world, despite its religious diversity."—Survival: Global Politics and Strategy

"An outstanding study with insight about the agency of Arab intellectuals, thinkers and people at large who, despite twentieth-century local and global violence, persist in struggling for a better world. This is a must- read for all scholars and students of Middle East and cultural studies."—Arab Studies Quarterly

"A hugely important corrective to widespread stereotypes about relations between Muslims, Christians and Jews before Israel's creation."—Peter Beinart

"Beyond the excellent historical work in which Makdisi engages, his profound rewriting of narratives of sectarianism and coexistence will have a great impact on readers’ understanding of the modern Middle East. . . . Offers hope for an existence that does not distinguish between Muslim and non-Muslim or Jew and non-Jew but aims to humanize those who have been seen as inferior."—Islam and Christian–Muslim Relations

"One of the salient contributions of the Age of Coexistence is how Makdisi writes a history that the existing scholarship has either taken for granted or failed to critically examine. . . . Indispensable reading for graduate students entering the field of Middle Eastern history."—Bustan: The Middle East Book Review

"This is clearly an essential book. . . . There are many lessons to learn from this study with regard to how regions and their peoples, their ethno-religious identities, and their politics are approached, investigated, and narrated."—Journal of Historical Geography

"What Makdisi has accomplished here is truly impressive. . . .It is my hope that as it spreads in classrooms and in public discourse, The Age of Coexistence will serve the final blow to Western-based stereotypes of a Middle East rife with senseless violence, authoritarianism, and strict religious rule."

"Offers a fresh look at the making of the modern Arab world. Given the plethora of studies that focus on contemporary wars and sectarian violence, this well-researched study employs Arabic and Western resources that challenge the prevailing perceptions about the region and its people. . . . An outstanding study with insight about the agency of Arab intellectuals, thinkers and people at large who, despite twentieth-century local and global violence, persist in struggling for a better world. This is a must-read for all scholars and students of Middle East and cultural studies."

“Makdisi brings to life the extraordinary men and women who fought on multiple fronts to create a modern antisectarian tradition in the Arab world. This work of scholarship and passion is urgent, necessary, and extremely welcome today, as the world struggles to fashion itself anew.”—Ahdaf Soueif, author of The Map of Love and Cairo: Memoir of a City Transformed

“Age of Coexistence dethrones the orthodox narrative of eternal antagonism and unchanging identity in the Middle East. This is scholarship at its best, thoroughly documented, well written, and provocative.”—Charles Glass, author of Tribes with Flags, The Tribes Triumphant, and Syria Burning and former ABC News chief Middle East correspondent

“In a time of sanguinary violence, ratcheted up globally, a sensitive and thoughtful reflection on the history of coexistence is needed more than ever. This incisive and absorbing book, written by a preeminent historian of sectarianism in the Middle East, asks important and urgent questions about the ambiguities, consequences, and astonishing contemporary relevance of the concept of coexistence. By adopting an ecumenical frame, and putting the story of coexistence and conflict in conversation with histories of imperialist depredation then and now, Ussama Makdisi greatly illuminates the possibilities, promises, and difficulties of ‘a new kind of political intimacy and meaningful solidarity’ between people of different sects and religions living together.”—Laleh Khalili, author of Time in the Shadows: Confinement in Counterinsurgencies

“This is an urgent, important, and eloquent book. It shatters persistent misconceptions about sectarianism and coexistence in the Arab world, from Egypt to Iraq, that are rooted in classical Orientalism and in misguided Western intervention in the region. Makdisi traces a convincing alternative narrative that provides an empathetic and sophisticated understanding of more than a century of the region’s history. It will satisfy specialists and general readers alike, and should be read by all those interested in global manifestations of sectarianism.”—Rashid Khalidi, author of Brokers of Deceit: How the U.S. Has Undermined Peace in the Middle East

“Demythologizing sectarianism and at the same time humanizing it, Makdisi shows us its history in all its complexities. By pairing it with an examination of coexistence, he challenges widespread assumptions about Middle Eastern exceptionalism and offers new arguments and constructs, most notably the ecumenical frame, for understanding the late Ottoman and post-Ottoman periods. In so doing, he sets a new research agenda for the field, encouraging comparison within and across regions. Makdisi takes on taboo topics with evidence, persuasion, and great erudition. Age of Coexistence is a masterpiece and a must-read for scholars of the Middle East and for all who care about struggles against inequality, in whatever form it takes.”—Beth Baron, author of The Orphan Scandal: Christian Missionaries and the Rise of the Muslim Brotherhood

“This impressive work on the challenges of coexistence in the modern Middle East, based on a solid methodology and an impeccable erudition, lives up to Makdisi’s ambition of historicizing this region instead of orientalizing it.”—Jean-Pierre Filiu, Professor of Middle East Studies, Sciences Po, Paris

“In this important new book, Makdisi offers both broad and specific analysis of sectarianism and its alternatives in the modern Middle East. His work remains a touchstone for all those working in the field and no doubt will continue to shape scholarly debates well beyond Middle East studies.”—Max Weiss, author of In the Shadow of Sectarianism: Law, Shi‘ism, and the Making of Modern Lebanon

“In a major contribution to Middle East studies in the United States, Makdisi asserts his powerful argument for a deeper appreciation of the long history of antisectarian Arab intellectuals with a sound archival base and an engaging narrative arc. With this book, he takes his previous influential three books to another level and a broader audience. It will—and ought to—be debated widely.”—Jens Hanssen, author of Fin de Siècle Beirut: The Making of an Ottoman Provincial Capital

“Beautifully written, with many felicitous turns of phrases, Makdisi’s work strikes an excellent balance between erudition and accessibility. With a persuasive argument, it is set up to generate debate and a rethinking of the history of Arabism and Arab nationalism.”—Dina Khoury, author of Iraq in Wartime: Soldiering, Martyrdom, and Remembrance

Part I
1. Religious Difference in an Imperial Age
2. The Crucible of Sectarian Violence
3. Coexistence in an Age of Genocide 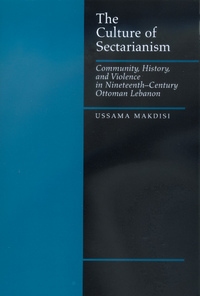 The Culture of Sectarianism