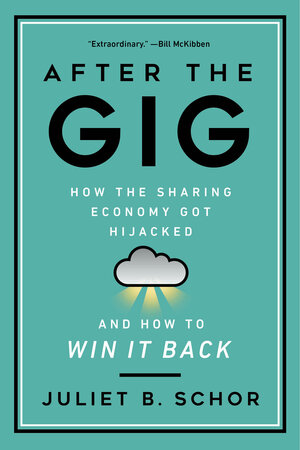 The dark side of the gig economy (Uber, Airbnb, etc.) and how to make it equitable for the users and workers most exploited.


When the “sharing economy” launched a decade ago, proponents claimed that it would transform the experience of work—giving earners flexibility, autonomy, and a decent income. It was touted as a cure for social isolation and rampant ecological degradation. But this novel form of work soon sprouted a dark side: exploited Uber drivers, neighborhoods ruined by Airbnb, racial discrimination, and rising carbon emissions. Several of the most prominent platforms are now faced with existential crises as they prioritize growth over fairness and long-term viability.

Nevertheless, the basic model—a peer-to-peer structure augmented by digital tech—holds the potential to meet its original promises. Based on nearly a decade of pioneering research, After the Gig dives into what went wrong with this contemporary reimagining of labor. The book examines multiple types of data from thirteen cases to identify the unique features and potential of sharing platforms that prior research has failed to pinpoint. Juliet B. Schor presents a compelling argument that we can engineer a reboot: through regulatory reforms and cooperative platforms owned and controlled by users, an equitable and truly shared economy is still possible.

Juliet B. Schor is an economist and sociologist and a New York Times best-selling author. She teaches at Boston College and is Chair of the Board of Directors of the Better Future Project.

"Eye-opening as it deconstructs the promises, and downfalls, of the sharing economy."—Foreword Reviews

“The author, a nimble writer, concludes that ‘social technology’ has to match technology itself, the foremost need being ‘learning how to share.’ The gig economy is a failure, Schor sharply chronicles—but not one that can’t be redeemed by ‘cooperation and helping.’”—Kirkus Reviews

“Schor’s case studies skillfully represent the full spectrum of optimism and disenchantment—those previously bullish on being their own boss, who have since been dragged into despair. . . . The takeaway from this book is that a complete reimagining of city governance is required if the sharing economy is ever going to work for the people.”?—Financial Times

"Using an engaging writing style that is accessible to a non-academic audience and to those unfamiliar with the topic, the author brings the reader on a journey along the evolution of the sharing economy, from its roots in the California counterculture through its affirmation in the global capitalist system, to a possible alternative future."

"After the Gig is a revelatory analysis of work in the emerging economy. Juliet Schor and her collaborators draw on years of in-depth research to show the extraordinary things that can happen when communities genuinely share valuable tasks, and also what happens when corporations turn potentially emancipatory practices into tools of exploitation. Essential reading for anyone trying to understand the future of labor."—Eric Klinenberg, author of Palaces for the People: How Social Infrastructure Can Help Fight Inequality, Polarization, and the Decline of Civic Life

"Juliet Schor and her team have created the most comprehensive and in-depth account of the ’sharing economy’ or ‘gig economy.’ This book critically tells the story of how and why this troubling, insecure model of work rose and attracted so much investment, so many workers, and so many customers."—Siva Vaidhyanathan, author of The Googlization of Everything — and Why We Should Worry.

"Before the pandemic, the gig economy was structurally racist, ecologically destructive, and profoundly exploitative. There’s every danger that the reconstruction will be worse. Yet this nuanced and sophisticated study also shows, through the analysis of gig economy workers themselves, that flexibility, a shared sense of purpose, and a commitment to sharing more is well within our grasp. As we turn to imagine what kind of economy and society we want after COVID-19, the work of Juliet Schor and her students will be indispensable."—Raj Patel, Research Professor at the Lyndon B Johnson School of Public Affairs, at the University of Texas at Austin

"This is sociology at its best, a consummate exploration of digitized work, a sharing economy that allocated responsibility but not the reward. It is a story of how peer-to-peer platforms designed to restore fairness, autonomy and dignity for workers ended up creating a new underclass. The last chapter of the sharing economy has not been written. After the Gig clearly identifies how to reboot the system back to its original DNA, a world based on community aided by technology that ensures equitability and economic opportunity for all.”—Paul Hawken, author of Blessed Unrest

"Juliet Schor and her team have done something extraordinary: their intensive research has let them understand what the sharing economy really feels like to its participants, and their storytelling ability lets the rest of us make complete sense of the data. In addition, they provide a workable plan for how to fulfill the promise of gig work as a part of a supportive, useful, fair economy. This book will redefine the field."—Bill McKibben, author of Deep Economy

"Cutting through the hype of the sharing economy and anxieties about gig work, Schor offers a deeply researched and thoughtful account of what promised (or threatened) to revolutionize work and ownership, but probably won't.  A must-read for anyone thinking about the future of work."—Yochai Benkler, Professor, Harvard Law School and Berkman Klein Center for Internet and Society at Harvard University

"This book is incredibly important. The story that Schor tells is further enhanced in that she tells it—not just across sectors—but also across positionalities."—Veena Dubal, Professor of Law, University of California, Hastings College of Law

"While others have batted around the gig economy with melodrama and polemic, Juliet Schor comes to the subject with incisive, challenging questions for both the alarm-raisers and the boosters. As a partisan in these debates myself, I've trusted no scholar as much as she to keep me honest."—Nathan Schneider, author of Everything for Everyone: The Radical Tradition That Is Shaping the Next Economy
Read More >

Acknowledgments
Note: This Book Has Been Coproduced

Introduction: The Problem of Work

1 From the Counterculture to “We Are the Uber of X”
2 Earning on the Platforms
3 Shared, but Unequal
4 “The Shared Economy Is a Lie”
5 Swapping with Snobs
6 Co-ops, Commons, and Democratic Sharing