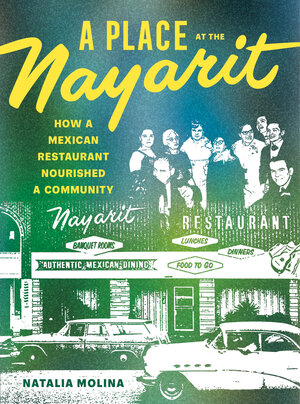 MacArthur Genius Natalia Molina unveils the hidden history of the Nayarit, a restaurant in Los Angeles that nourished its community of Mexican immigrants with a sense of belonging.

In 1951, Doña Natalia Barraza opened the Nayarit, a Mexican restaurant in Echo Park, Los Angeles. With A Place at the Nayarit, historian Natalia Molina traces the life’s work of her grandmother, remembered by all who knew her as Doña Natalia––a generous, reserved, and extraordinarily capable woman. Doña Natalia immigrated alone from Mexico to L.A., adopted two children, and ran a successful business. She also sponsored, housed, and employed dozens of other immigrants, encouraging them to lay claim to a city long characterized by anti-Latinx racism. Together, the employees and customers of the Nayarit maintained ties to their old homes while providing one another safety and support.

The Nayarit was much more than a popular eating spot: it was an urban anchor for a robust community, a gathering space where ethnic Mexican workers and customers connected with their patria chica (their “small country”). That meant connecting with distinctive tastes, with one another, and with the city they now called home. Through deep research and vivid storytelling, Molina follows restaurant workers from the kitchen and the front of the house across borders and through the decades. These people's stories illuminate the many facets of the immigrant experience: immigrants' complex networks of family and community and the small but essential pleasures of daily life, as well as cross-currents of gender and sexuality and pressures of racism and segregation. The Nayarit was a local landmark, popular with both Hollywood stars and restaurant workers from across the city and beloved for its fresh, traditionally prepared Mexican food. But as Molina argues, it was also, and most importantly, a place where ethnic Mexicans and other Latinx L.A. residents could step into the fullness of their lives, nourishing themselves and one another. A Place at the Nayarit is a stirring exploration of how racialized minorities create a sense of belonging. It will resonate with anyone who has felt like an outsider and had a special place where they felt like an insider.

"A fascinating study of a single business’s impact on a community."—Alta Magazine

"The Nayarit was a historic place in Los Angeles. Who doesn't speak of it?"—Jaime Jarrín, Spanish-language broadcaster for the Los Angeles Dodgers and National Baseball Hall of Fame Ford C. Frick Award Winner

"We throw around words like 'community' and 'hospitality' all of the time when speaking of restaurants, these third spaces that are neither home or work. But rarely do we find an example of those qualities displayed deeply and truly as in the story of the Nayarit Restaurant and its matriarch and the bridges she and her family built between communities in Los Angeles. The story of Doña Natalia, told by her granddaughter Natalia Molina, is a must-read for anyone interested in the vital role restaurants can have in their communities."—Evan Kleiman, chef, author, and host of Good Food on KCRW

"In this stunning book, Natalia Molina reanimates for us the stories, loves, and lives that flourished under the elegant but faded 'Nayarit' restaurant sign that's hovered over Echo Park for decades: a story that is not only her family's own but also a spark of Mexican American world-building in Los Angeles."—Karen Tongson, author of Why Karen Carpenter Matters and Relocations: Queer Suburban Imaginaries


"Combining histories of family, ethnic queer, labor, women, and space, this book is a masterpiece of place as it shows how a neighborhood restaurant functioned as the center of multiple ignored-too-long universes."—Gustavo Arellano, columnist, Los Angeles Times

"What is the nature of place-making? It's an essential question in terms of how we think about cities and how they operate, and it has long sat at the center of Natalia Molina's work. In A Place at the Nayarit, Molina expands on her previous efforts by going personal. Through the lens of her grandmother's restaurant, Molina creates a vivid portrait of mid-century Echo Park, but even more, she frames the contradictions of place and who gets to belong—especially for those who exist, as Molina observes, 'beneath the official timeline of events.' With this book, Molina has expanded her vision by turning it inward, to examine with subtlety and nuance the territory of family and identity."—David L. Ulin, author of Sidewalking: Coming to Terms with Los Angeles and editor of Writing Los Angeles: A Literary Anthology

"Centered on her grandmother's restaurant in Echo Park, The Nayarit, Molina's original ethnography reveals political and cultural placemaking by an entrepreneurial family. A must-read for historians of Los Angeles as well as feminist scholars and foodies."—Dolores Hayden, author of The Power of Place: Urban Landscapes as Public History

"A Place at the Nayarit puts Mexican immigrants at the center of the history of race, sexuality, and belonging in L.A., a place so segregated that it was known as America's 'white spot.' With a gripping narrative, Molina documents how her extraordinary grandmother established a restaurant and used it to nourish a community of immigrants. Their community thrived until the age of gentrification began, banishing businesses and families one by one and in a myriad of ways."—Kelly Lytle Hernández, author of Migra! and City of Inmates
Read More >

Introduction. Placemaking in a New Homeland