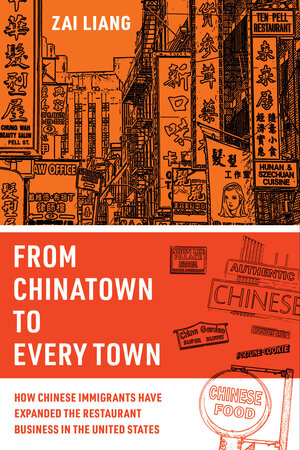 From Chinatown to Every Town explores the recent history of Chinese immigration within the United States and the fundamental changes in spatial settlement that have relocated many low-skilled Chinese immigrants from New York City's Chinatown to new immigrant destinations. Using a mixed-method approach over a decade in Chinatown and six destination states, sociologist Zai Liang specifically examines how the expansion and growing popularity of Chinese restaurants has shifted settlement to more rural and faraway areas. Liang's study demonstrates that key players such as employment agencies, Chinatown buses, and restaurant supply shops facilitate the spatial dispersion of immigrants while simultaneously maintaining vital links between Chinatown in Manhattan and new immigrant destinations.

Zai Liang is Professor of Sociology at the State University of New York at Albany.

"A must-read for anyone interested in how immigrants are changing America. The important story the book tells is not just of immigrant pluck, though there is plenty of that, but also of immigrant inventiveness—how Chinese newcomers have created institutions, such as bus lines, that support immigrant mobility and also influence the mainstream. There's a major lesson here for twenty-first-century America."—Richard Alba, author of The Great Demographic Illusion: Majority, Minority, and the Expanding American Mainstream

"From Chinatown to Every Town tells the story of immigrant Chinese restaurant entrepreneurs and their coethnic workers who are spreading out to rural places and small towns in America's heartland. Filled with intriguing detail, it keeps readers engaged in thinking critically about broader issues of immigrant spatial settlement, ethnic network formation, and socioeconomic integration."—Min Zhou, author of Chinatown: The Socioeconomic Potential of an Urban Enclave

"From Chinatown to Every Town offers a trenchant and fascinating analysis of the social structures and economic processes that undergird the spread of Chinese restaurants out of Manhattan's Chinatown and into new destinations throughout the United States, thereby creating an integrated, multisite enclave economy that functions as a dynamic 'job machine' for immigrants and natives alike. Beyond being an important scholarly contribution, it's also a great read."—Douglas S. Massey, Henry G. Bryant Professor of Sociology and Public Affairs, Princeton University