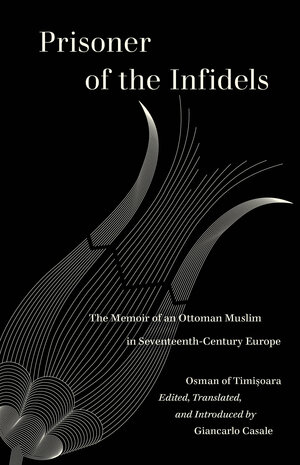 Victor Hugo meets Papillon in this effervescent memoir of war, slavery, and self-discovery, told with aplomb and humor in its first English translation.

A pioneering work of Ottoman Turkish literature, Prisoner of the Infidels brings the seventeenth-century memoir of Osman Agha of Timişoara—slave, adventurer, and diplomat—into English for the first time. The sweeping story of Osman’s life begins upon his capture and subsequent enslavement during the Ottoman–Habsburg Wars. Adrift in a landscape far from his home and traded from one master to another, Osman tells a tale of indignation and betrayal but also of wonder and resilience, punctuated with queer trysts, back-alley knife fights, and elaborate ruses to regain his freedom.

Throughout his adventures, Osman is forced to come to terms with his personhood and sense of belonging: What does it mean to be alone in a foreign realm and treated as subhuman chattel, yet surrounded by those who see him as an object of exotic desire or even genuine affection? Through his eyes, we are treated to an intimate view of seventeenth-century Europe from the singular perspective of an insider/outsider, who by the end his account can no longer reckon the boundary between Islam and Christendom, between the land of his capture and the land of his birth, or even between slavery and redemption.

“An invaluable read for anyone interested in Ottoman, European, and early modern history. This rich and lively memoir, written by an Ottoman captive who enters into Viennese society, will change your view of where Muslims belong in European history.”—Molly Greene, Professor of History and Hellenic Studies, Princeton University

"The account of Osman of Timişoara is unique as one of the few examples of early modern Ottoman autobiography, as well as a very rare Muslim slave narrative. Giancarlo Casale breathes life into Osman’s tale in this sparkling translation, which will be of great value and interest to scholars and students alike."—Eric Dursteler, Professor of History, Brigham Young University