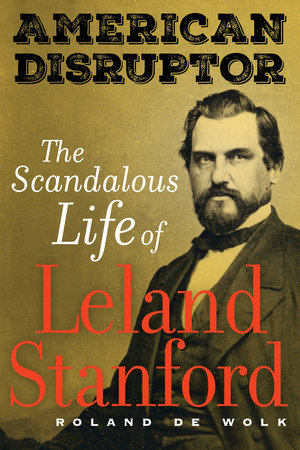 The rags to riches story of Silicon Valley's original disruptor.

It is also the saga of how Stanford, once a serial failure, overcame all obstacles to become one of America’s most powerful and wealthiest men, using his high elective office to enrich himself before losing the one thing that mattered most to him – his only child and son. Scandal and intrigue would follow Stanford through his life, and even after his death, when his widow was murdered in a Honolulu hotel – a crime quickly covered up by the almost stillborn university she had saved. Richly detailed and deeply researched, American Disruptor restores Leland Stanford’s rightful place as a revolutionary force and architect of modern America.

“…readable and entertaining. . . . De Wolk not only introduces a much more believable Stanford, warts and all, but also does a great job of showing how his legacy and reputation was …

"Readable and entertaining. . . . De Wolk not only introduces a much more believable Stanford, warts and all, but also does a great job of showing how his legacy and reputation was managed, massaged and sanitized after his death."—True West

"A superb new account of Stanford’s 'preposterous career and life.'"—Berkeleyside

"Stanford was an uneducated anti-intellectual, yet defined himself as “a technologist” and wanted Stanford University to thrive as a trade school. He played a major role in vaulting America into peak ascendancy, yet had few qualms bilking taxpayers out of millions of dollars in the process (before going on to be a U.S. Senator). And those are just a few of the threads that De Wolk pulls to weave an engaging and highly relevant portrait of a profoundly influential, turbulent and, yes—“scandalous” life."—Six Fifty

"Stanford’s warts have long been on display, and De Wolk doesn’t avoid them, but the details the author has unearthed reveal a far more complex figure, one who clearly loved his wife and son. The author sums him up as an ordinary man who found himself in extraordinary circumstances and contends that history 'shows that the business Stanford pioneered was the foundation not only for Silicon Valley but also for the modern corporation itself.'"—HistoryNet

"Deeply researched and richly detailed, American Disruptor chronicles the life of Leland Stanford and the wide-open world in which he lived. From Gold Rush days to completion of the first transcontinental railroad to the founding of Stanford University, Roland De Wolk skillfully unfolds this narrative about a bold, darkly contradictory man who, in his way, constantly made history."—Barry Siegel, Pulitzer Prize winner and author of Dreamers and Schemers

"American Disruptor is beautifully written and fully researched with analysis and documentation. This is the story of Leland Stanford, an early failure, an entrepreneur, and the visionary that linked America’s East and West with a ribbon of steel. Stanford was the enigmatic serial entrepreneur who laid the foundation for Stanford University and the world-impacting entrepreneurs of Silicon Valley."—John McLaughlin, President, Silicon Valley Historical Association

"A rip-roaring new biography of the robber baron & politico after whom Stanford University is named. How *that* happened is one of many great stories told by ?author Roland De Wolk. . . . [I] highly recommend it."—William Powers, author of Hamlet’s BlackBerry: Building a Good Life in the Digital Age