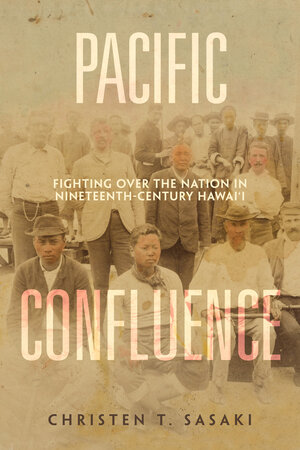 Pacific Confluence Fighting over the Nation in Nineteenth-Century Hawai'i

The 1898 annexation of Hawaiʻi to the US is often framed as an inevitable step in American expansion—but it was never a foregone conclusion. By pairing the intimate and epic together in critical juxtaposition, Christen T. Sasaki reveals the unstable nature not just of the coup state but of the US empire itself. The attempt to create a US-backed white settler state in Hawaiʻi sparked a turn-of-the-century debate about race-based nationalism and state-based sovereignty and jurisdiction that was contested on the global stage. Centered around a series of flash points that exposed the fragility of the imperial project, Pacific Confluence examines how the meeting and mixing of ideas that occurred between Hawaiians and Japanese, white American, and Portuguese transients and settlers led to the dynamic rethinking of the modern nation-state.

Christen T. Sasaki is Assistant Professor of Ethnic Studies at the University of California, San Diego.

"A groundbreaking study of settler colonialisms and relational racial formations in late nineteenth-century Hawaiʻi. Theoretically sophisticated and empirically rich, this densely textured book documents the complex entanglement of multiple imperial powers, haole insurrectionists, and the Hawaiian Kingdom and people that culminated in clashing visions of nation, state, sovereignty, and land."—Eiichiro Azuma, author of In Search of Our Frontier: Japanese America and Settler Colonialism in the Construction of Japan's Borderless Empire

"Anyone who thinks US imperial control of Hawaiʻi was and is inevitable should read this book. Highlighting competing empires and analyzing white supremacy in imperial projects, Christen Sasaki reveals the instability of the settler coup state and of US empire in the islands."—Noelani Goodyear-Kaʻōpua, Professor of Political Science, University of Hawaiʻi at Mānoa

"The US empire's annexation of Hawaiʻi was never inevitable. Sasaki's astute exploration of the tenuousness of the haole coup and the tenaciousness of Kanaka Maoli (Native Hawaiian) resistance reveals what might have been and what could be, in terms that refuse to normalize colonial dispossession and racial domination."—Moon-Ho Jung, author of Menace to Empire: Anticolonial Solidarities and the Transpacific Origins of the US Security State


"Brilliantly argued and deftly theorized, this book makes exciting critical interventions by exposing the prevarication of US nation-state formation and settler colonialism in Hawaiʻi at the intersection of Japanese, Portuguese, and US empires. Sasaki's focus on global contingencies opens up histories that could have been and decolonial futures to come."—Candace Fujikane, author of Mapping Abundance for a Planetary Future: Kanaka Maoli and Critical Settler Cartographies in Hawaiʻi

"The 1890s brought a maelstrom of change to the peoples and the nation of Hawaiʻi. Sasaki's thoughtful examination of the interactions in that decade among Native Hawaiians, white settler coup plotters, Japanese immigrant laborers, and the governments of Portugal, Japan, and the United States illuminates that those various actors' ideas and strategies about nationhood, citizenship, empire, and US-owned white settler imperial outposts were by no means inevitable. She calls us to consider the contingency of history and other, perhaps better paths that might have been taken, and some that still might be possible."—Paul Spickard, coeditor of Shape Shifters: Journeys across Terrains of Race and Identity

"Pacific Confluence recasts the story of the US annexation of Hawaiʻi as a larger global story about competing sovereignties and the precarious grounds on which the US imperial project unfolded. Beautifully written and provocatively argued, it expands our imagination for the possibilities of decolonization beyond the nation-state form."—Simeon Man, author of Soldiering through Empire: Race and the Making of the Decolonizing Pacific

"Pacific Confluence contextualizes events in the continental US with those in Hawaiʻi, as well as Japan and Portugal. Sasaki strikes a great balance between stories of top-level leaders and everyday people. Strongly recommend."—JoAnna Poblete, author of Balancing the Tides: Marine Practices in American Sāmoa

2. At the Borders of Nation and State: The 1894 Constitutional Convention

3. How the Portuguese Became White: The Search for Labor and the Cost of Indemnity