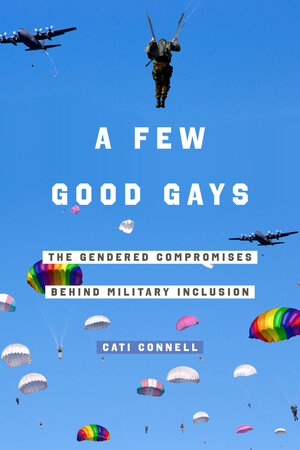 A Few Good Gays The Gendered Compromises behind Military Inclusion

The US military has done an about-face on gender and sexuality policy over the last decade, ending Don’t Ask, Don’t Tell, restrictions on women in combat, and transgender exclusion. Contrary to expectations, servicemembers have largely welcomed cisgender LGB individuals—yet they continue to vociferously resist trans inclusion and the presence of women on the front lines. In the minds of many, the embodied “deficiencies” of cisgender women and trans people of all genders puts others—and indeed, the nation—at risk.

In this book, Cati Connell identifies the homonormative bargain that underwrites these uneven patterns of reception—a bargain that comes with significant concessions, upholding and even exacerbating race, class, and gender inequality in the pursuit of sexual equality. In this handshake deal, even the widespread support for open LGB service is highly conditional, revocable upon violation of the bargain. Despite the promise of inclusivity, in practice, the military has made room only for a “few good gays,” to the exclusion of all others.

But should equal access be the goal? How did we get from there to here? And where do we go next? In analyzing inclusion as a social movement aspiration, Connell shows that its steep price is exacted through the continued abjection of queered Others, both at home and abroad.

Cati Connell is Associate Professor of Sociology and Women’s, Gender, and Sexuality Studies at Boston University.

"Was the bargain for equality worth it? In a daring exploration of this timely question, A Few Good Gays turns to recent gender and sexual changes in the military to show that a right won is not a right secured. In documenting the pitfalls of assimilation, Cati Connell pushes us to radically reimagine actual queer freedom."—Brandon Andrew Robinson, author of Coming Out to the Streets: LGBTQ Youth Experiencing Homelessness

"This book is a timely, critical contribution to the study of homonormativity and assimilation in the military and, more broadly, in American society. Connell poses the right questions about the experiences of LGBTQ people in the military during these times of policy change."—Amy L. Stone, author of Queer Carnival: Festivals and Mardi Gras in the South

"This is an outstanding book, one of the most truly intersectional pieces of sociology I have read in some time."—Jonathan Simon, Lance Robbins Professor of Criminal Justice Law, University of California, Berkeley

Introduction: The Dawning of a Kinder, Gentler US Military

2. “What They Do in Their Private Life, I Couldn’t Care Less”: Striking the
Homonormative Bargain

3. “He Acts Straight but He Has This One Thing . . .”: Open LGB Service and
Queer Social Control

4. “When You Want to Create a Group of Male Killers, You Kill the Woman in Them”:
Feminine Abjection and the Impossibility of Women Warriors

5. “My Problem’s Not That I’m Gay; My Problem Is That I’m a Woman”: The Patriotic
Paternalism of Combat Exclusion

6. “Once He Saw Them as Soldiers, I Knew We Had It”: The Trans Ban Tug of War

7. “You Can’t Have Three Bathrooms at a Forward Operating Position”: Gender Panic in the
Transgendering Organization

8 . We Will Be Greeted as Gay Liberators?