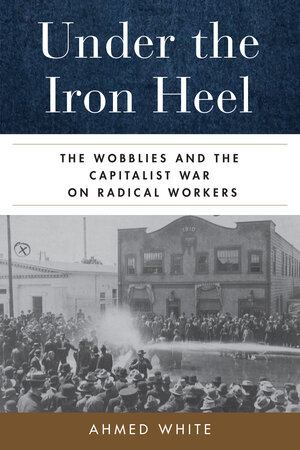 A dramatic, deeply researched account of how legal repression and vigilantism brought down the Wobblies—and how the destruction of their union haunts us to this day.

In 1917, the Industrial Workers of the World was rapidly gaining strength and members. Within a decade, this radical union was effectively destroyed, the victim of the most remarkable campaign of legal repression and vigilantism in American history. Under the Iron Heel is the first comprehensive account of this campaign.

Founded in 1905, the IWW offered to the millions of workers aggrieved by industrial capitalism the promise of a better world. But its growth, coinciding with World War I and the Russian Revolution and driven by uncompromising militancy, was seen by powerful capitalists and government officials as an existential threat that had to be eliminated. In Under the Iron Heel, Ahmed White documents the torrent of legal persecution and extralegal, sometimes lethal violence that shattered the IWW. In so doing, he reveals the remarkable courage of those who faced this campaign, lays bare the origins of the profoundly unequal and conflicted nation we know today, and uncovers disturbing truths about the law, political repression, and the limits of free speech and association in class society.

By Ahmed White, author of Under the Iron Heel: The Wobblies and the Capitalist War on Radical Workers In the late 1910s and early 1920s, the Industrial Workers of the World was …

Ahmed White teaches labor and criminal law at the University of Colorado Boulder and is author of The Last Great Strike: Little Steel, the CIO, and the Struggle for Labor Rights in New Deal America.

"With a gripping narrative and incisive analysis, Under the Iron Heel shows how federal agencies, state governments, and local police combined to create a state-sanctioned reign of terror against a mostly peaceful union, the Industrial Workers of the World. Ahmed White, a distinguished historian of labor law, demonstrates that the destruction of the Wobblies was a pivotal moment in history of capitalist suppression of unions. Anyone interested in the history and politics of labor in the United States should read this book."—Kathryn S. Olmsted, author of Right Out of California: The 1930s and the Big Business Roots of Modern Conservatism

"Deeply researched and movingly written, Under the Iron Heel provides the definitive account of the criminalization of the most significant radical union in American history. Ahmed White's study of the destruction of the IWW reveals a legacy of repression that continues to shape the labor movement to this day."—Gabriel Winant, author of The Next Shift: The Fall of Industry and the Rise of Health Care in Rust Belt America

"No American union has come close to approximating the revolutionary potential and dynamism of the IWW. Ahmed White's deeply researched, powerfully written book hammers home a fundamental point too often forgotten: ferocious repression, by the government and businesses, was the primary reason for this revolutionary union's decline. In greater depth than any previous work, White explains systematic efforts by the federal government, dozens of state governments, and businesses across the nation to crush the IWW and all for which it stood."—Peter Cole, author of Ben Fletcher: The Life and Writings of a Black Wobbly


"Provocative, extensively researched, and heartbreaking, Ahmed White's Under the Iron Heel tells how the state conspired with powerful business interests to break the IWW while revealing important truths about repression's role in the making of modern America."—Paul Buhle, coeditor of The Encyclopedia of the American Left and Wobblies!
Read More >

Introduction
Face to Face with Tragedy

1. Socialism with Its Working Clothes On
Industrial Capitalism, Radical Unionism, and the Roots of Repression
2. Protecting the Business People
Class, Law, and the Criminalization of Radical Industrial Unionism
3. In the War of Capital against Labor Someone Must Suffer
The War and the IWW
4. I’ll Take neither Mercy nor Pity
Repression and the IWW during the Red Scare
5. Dealing the Death Blow
Repression and the IWW after the Red Scare
6. Between the Drowning and the Broken
Punishment, Law, and the Legacies of Repression
Conclusion
A Vision We Don’t Possess