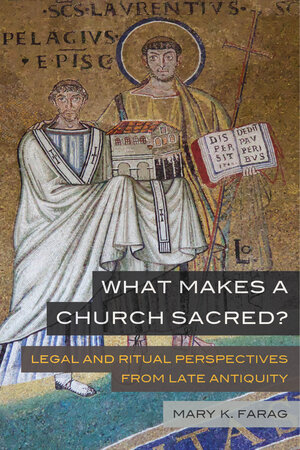 What Makes a Church Sacred? Legal and Ritual Perspectives from Late Antiquity

What is the purpose of a church? Who owns a church? Mary K. Farag persuasively demonstrates that three groups in late antiquity were concerned with these questions: Christian leaders, wealthy laypersons, and lawmakers. Conflicting answers usually coexisted, but from time to time they clashed and caused significant tension. In these disputes, juridical regulations and opinions mattered more than has been traditionally recognized. Considering familiar Christian controversies in novel ways, Farag’s investigation shows that scholarship has misunderstood well-known religious figures by ignoring the legal issues they faced. This seminal text nuances vital aspects of scholarly conversations on sacred space, gift giving, wealth, and poverty in the late antique Mediterranean world, making use not only of Latin and Greek sources but also Coptic and Arabic evidence.

“This is a book I have long been looking for. Meticulously conceived and argued, it provides the first comprehensive survey and analysis of what made a church sacred in late antiquity. It will likely become a standard reference on the topic for decades to come.”—Wendy Mayer, Australian Lutheran College, University of Divinity