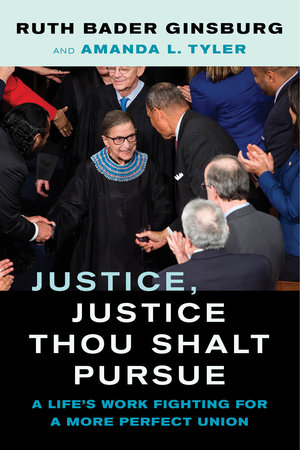 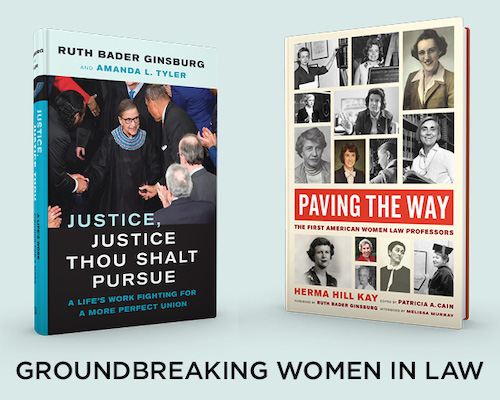 Ruth Bader Ginsburg's last book is a curation of her own legacy, tracing the long history of her work for gender equality and a “more perfect Union.”

In the fall of 2019, Justice Ruth Bader Ginsburg visited the University of California, Berkeley School of Law to deliver the first annual Herma Hill Kay Memorial Lecture in honor of her friend, the late Herma Hill Kay, with whom Ginsburg had coauthored the very first casebook on sex-based discrimination in 1974. Justice, Justice Thou Shalt Pursue is the result of a period of collaboration between Ginsburg and Amanda L. Tyler, a Berkeley Law professor and former Ginsburg law clerk. During Justice Ginsburg's visit to Berkeley, she told her life story in conversation with Tyler. In this collection, the two bring together that conversation and other materials—many previously unpublished—that share details from Justice Ginsburg's family life and long career. These include notable briefs and oral arguments, some of Ginsburg's last speeches, and her favorite opinions that she wrote as a Supreme Court Justice (many in dissent), along with the statements that she read from the bench in those important cases. Each document was chosen by Ginsburg and Tyler to tell the story of the litigation strategy and optimistic vision that were at the heart of Ginsburg's unwavering commitment to the achievement of "a more perfect Union."

In a decades-long career, Ruth Bader Ginsburg was an advocate and jurist for gender equality and for ensuring that the United States Constitution leaves no person behind. Her work transformed not just the American legal landscape, but American society more generally. Ginsburg labored tirelessly to promote a Constitution that is ever more inclusive and that allows every individual to achieve their full human potential. As revealed in these pages, in the area of gender rights, Ginsburg dismantled long-entrenched systems of discrimination based on outdated stereotypes by showing how such laws hold back both genders. And as also shown in the materials brought together here, Justice Ginsburg had a special ability to appreciate how the decisions of the high court impact the lived experiences of everyday Americans. The passing of Justice Ruth Bader Ginsburg in September 2020 as this book was heading into production was met with a public outpouring of grief. With her death, the country lost a hero and national treasure whose incredible life and legacy made the United States a more just society and one in which “We the People,” for whom the Constitution is written, includes everyone.

Ruth Bader Ginsburg (1933–2020) was Associate Justice of the United States Supreme Court. Born in Brooklyn, New York, she received her BA from Cornell University, attended Harvard Law School, and received her LLB from Columbia Law School. From 1959 to 1961, Ginsburg served as a law clerk to the Honorable Edmund L. Palmieri, Judge of the United States District Court for the Southern District of New York. She was a professor of law at Rutgers University School of Law (1963–1972) and at Columbia Law School (1972–1980). She was appointed a judge of the United States Court of Appeals for the District of Columbia Circuit in 1980. Then-president Clinton nominated her as Associate Justice of the Supreme Court, and she took her seat on August 10, 1993. Justice Ginsburg died on September 18, 2020, as this book was going into production.

Amanda L. Tyler is Shannon Cecil Turner Professor of Law at the University of California, Berkeley School of Law, where she teaches and writes about the Supreme Court, the federal courts, constitutional law, and civil procedure. The author of many articles and several books, including Habeas Corpus in Wartime: From the Tower of London to Guantanamo Bay, Tyler also serves as a coeditor of the prominent casebook and treatise Hart and Wechsler’s The Federal Courts and the Federal System. Tyler served as a law clerk to the Honorable Ruth Bader Ginsburg at the Supreme Court of the United States during the October Term 1999.

"Even if you've read Ginsburg's memoir or seen the biopic On the Basis of Sex, this book will offer new insight into her storied career—and its lingering impact on the American legal system. . . . As Ginsburg said, 'Fight for the things that you care about, but do it in a way that will lead others to join you.' We'll be joining her, once again, in the pages of this book."—O, The Oprah Magazine

"Anyone needing more reasons to admire Ruth Bader Ginsburg (1933-2020) will find them in this inspiring collection of speeches (all previously unpublished), briefs, oral arguments, dissenting opinions, and a candid conversation with Tyler, a professor at the Berkeley School of Law who served as Ginsburg’s law clerk during the 1999 term. . . . An informative perspective on a tireless advocate for fairness and equity."—Kirkus Reviews

“Because each of Ginsburg’s words is so meaningful, this volume feels like a final gift. . . . Ginsburg inscribed herself into American history with the shining conviction of her vision of a more perfect union, expressed in her powerfully and deliberately chosen words. Working until the very end, she was determined to leave us this final anthology, and all of her words are significant.”—Jeffrey Rosen, Washington Post

"Ruth Bader Ginsburg was a feminist icon, a legal titan, and an inspiration to so many, including me. Her final work gives readers a glimpse at the person behind the accomplishments and shines a light on her life and legacy as she saw it, from her earliest efforts to dismantle gender discrimination to her unwavering commitment as Supreme Court Justice to fight for equality and a Constitution that leaves no one behind. Justice, Justice Thou Shalt Pursue is a gift to readers and a stirring call to continue the fights she waged."—Hillary Rodham Clinton, former United States Secretary of State


"Every word Ruth Bader Ginsburg left us is precious, and this book is a treasure trove. Don't live your days without it."—Gloria Steinem, feminist activist and author

"Want to know what RBG's favorite opinions were? Or hear about her repeated battles with cancer? Or read her message about how important it is for all Americans to play their part in helping to achieve 'a more perfect Union'? Prior to Justice Ginsburg's death, she and her onetime law clerk Professor Amanda Tyler managed to assemble this book that weaves together multiple aspects of Ginsburg's life, both legal and personal, into a wide-ranging yet accessible volume that will leave the reader inspired."—Nina Totenberg, Legal Affairs Correspondent, National Public Radio

"The inspiring and persuasive power of Justice Ginsburg's voice emanates from every page of this book. Her reflections on her own journey as daughter, wife, mother, lawyer are as resonant as her powerful opinions—often in dissent—in telling the story of the struggle of American women for gender equality, and in articulating with penetrating clarity the uniquely stubborn persistence of racial inequality in American life."—Sherrilyn Ifill, President and Director-Counsel, NAACP Legal Defense and Educational Fund, Inc.

"With Justice Ginsburg, Amanda Tyler has compiled a page-turning book that is the perfect tribute to her former employer and hero, the incomparable Ruth Bader Ginsburg. Anyone interested in how the 'notorious' RBG transformed American law to begin the still-unfinished journey toward the goal of securing equality without regard to sex must read this splendid road map through the great jurist's path-marking work. Bringing a legend to life isn't easy. With Ginsburg, Tyler has done that and more—lovingly and with deep understanding."—Laurence H. Tribe, Carl M. Loeb University Professor and Professor of Constitutional Law Emeritus, Harvard Law School

"In this, her final project, Ruth Bader Ginsburg reflects on her life's work—dismantling patriarchy and fighting for all to have the freedom to thrive regardless of gender. As this volume documents, she began this work in earnest during the eight years she spent as director of the ACLU's Women's Rights Project in the 1970s and continued as a Justice on the Supreme Court and until her final days. We at the ACLU will use each day to carry forward the legacy built in these pages."—Ria Tabacco Mar, Director, Women's Rights Project, American Civil Liberties Union

"An invaluable volume by the most significant figure in this field that will serve as a reference for decades to come."—Jenny S. Martinez, Dean, Stanford Law School
Read More >