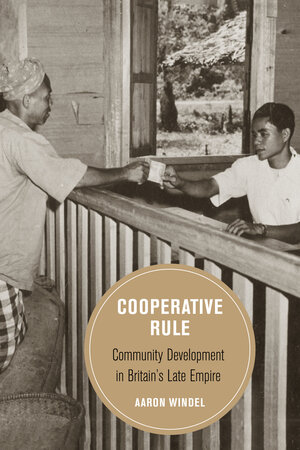 While many have interpreted the cooperative movement as propagating a radical alternative to capitalism, Cooperative Rule shows that in the late British Empire, cooperation became an important part of the armory of colonialism. The system was rooted in British rule in India at the end of the nineteenth century. Officials and experts saw cooperation as a unique solution to the problems of late colonialism, one able to both improve economic conditions and defuse anticolonial politics by allowing community uplift among the empire’s primarily rural inhabitants. A truly transcolonial history, this ambitious book examines the career of cooperation from South Asia to Eastern and Central Africa and finally to Britain. In tracing this history, Aaron Windel opens the door for a reconsideration of how the colonial uses of cooperation and community development influenced the reimagination of community in Europe and America from the 1960s onward.

"An electric account of the cooperative movement’s role in rural modernization. . . .an ambitious and clear-headed. . . .contribution to these literatures and to courses on colonial development, anti-colonial politics, and late imperial history."—H-Soz-Kult

"This is a highly ambitious work that retells the history of Britain's efforts at mid-twentieth century colonial development through an examination of a set of institutions and practices associated with cooperatives. In its range, depth, and rethinking, the book pulls together a startling degree of both historical argument and carefully examined but distinctive cases."—Dr. L. Carol Summers, author of Colonial Lessons: Africans' Education in Southern Rhodesia, 1918–1940

"Aaron Windel's erudition extends beyond a conventional British studies approach, diving deep into the terrain of the serious transnational practitioner. Its ambitions are many, and the arguments are there—of this there is no question. It will make an outstanding contribution to British studies, a field undergoing profound realignment for the modern period. This is a chastening and enlightening narrative."—Susan D. Pennybacker, Chalmers W. Poston Distinguished Professor of European History, University of North Carolina at Chapel Hill

"This innovative book compellingly argues that the idea of cooperation as a touchstone of community development had a long and consequential life in British efforts to consolidate dominance in India and Africa. Windel's sophisticated analysis reveals a novel lens for understanding British imperialism and the ways that imperial cooperative development ideology informed modernizing projects in postcolonial states."—Moses E. Ochonu, author of Colonial Meltdown: Northern Nigeria in the Great Depression


"This book is a tour de force. It convincingly shows how cooperation as technopolitics spread across the British empire to stabilize peasantries, discipline character, and stem anticolonial activism. Yet in postwar Uganda, cooperatives became spaces of resistance devising countervisions of development, while the British cooperative movement struggled with racialized contradictions. This study offers compelling insights into the theory and practice of colonial rule, the history of development and decolonization."—Stephan F. Miescher, author of A Dam for Africa: Akosombo Stories from Ghana

"Fascinating account of cooperative development as imperial rulership from its deepest roots in colonial Punjab to the fringes of the British Empire in postwar Africa. The book masterfully uses diverse colonial and missionary archives to explore the intersecting genealogies of community development and cooperative development."—Prakash Kumar, Associate Professor of History, Pennsylvania State University, University Park