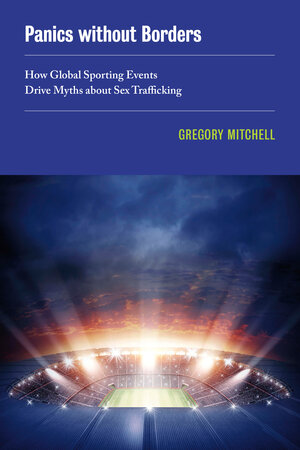 We are living in a time of great panic about “sex trafficking”—an idea whose meaning has been expanded beyond any real usefulness by evangelicals, conspiracy theorists, anti-prostitution feminists, and politicians with their own agendas. This is especially visible during events like the FIFA World Cup and the Olympic Games when claims circulate that as many as 40,000 women and girls will be sex trafficked. Drawing on extensive fieldwork in Brazil as well as interviews with sex workers, policymakers, missionaries, and activists in Russia, Qatar, Japan, the UK, and South Africa, Gregory Mitchell shows that despite such baseless statistical claims, sex trafficking never increases as a result of these events. However, police violence against sex workers always does.

While advocates have long decried this myth, Mitchell follows the discourse across host countries to ask why this panic so easily embeds during these mega-events. What fears animate it? Who profits? He charts the move of sex trafficking into the realm of the spectacular—street protests, awareness-raising campaigns, telenovelas, social media, and celebrity spokespeople—where it spreads across borders. This trend is dangerous because these events happen in moments of nationalist fervor, in which fears of foreigners and migrants are heightened and easily exploited, to frightening ends.

Gregory Mitchell is the author of Tourist Attractions: Performing Race and Masculinity in Brazil’s Sexual Economy and is Associate Professor of Women’s, Gender, & Sexuality Studies at Williams College.

"Panics Without Borders will make an important contribution in the current literature on sex trafficking. I have not seen any book of this kind that is truly comparative in scope and that challenges the myth of the 40,000 missing girls that gives serious attention to how the people supposedly being trafficked understand themselves in the world."—Keisha-Khan Y. Perry, author of Black Women against the Land Grab: The Fight for Racial Justice in Brazil

“Panics Without Borders is the first full-length ethnography to focus on mega-events and the trafficking myth. It provides ethnographic evidence to refute the baseless claim that sports events correspond with increases in sex trafficking and exploitation.”—Erica Lorraine Williams, author of Sex Tourism in Bahia