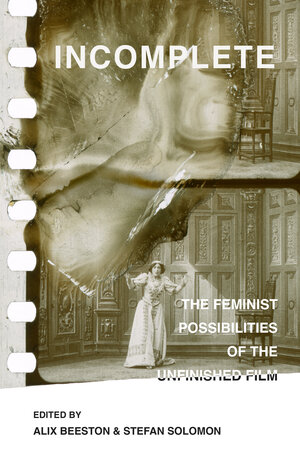 Incomplete The Feminist Possibilities of the Unfinished Film

Alix Beeston is Senior Lecturer in English at Cardiff University and author of In and Out of Sight: Modernist Writing and the Photographic Unseen.

Stefan Solomon is Senior Lecturer in Media Studies at Macquarie University and author of William Faulkner in Hollywood: Screenwriting for the Studios.

"A groundbreaking volume, Incomplete establishes the feminist possibilities of the unfinished film, a capacious category encompassing works that are lost or fragmentary; projects that were unrealized, aborted, or thwarted; and films that are deliberately open-ended or ongoing. Surprisingly generative rather than a mark of failure, incompletion is a powerful site of possibility for feminist film scholarship and filmmaking. By creatively expanding the methodologies and theoretical frameworks of feminist attention to filmic incompletion, this volume expertly demonstrates the rich and varied potentialities of incompletion."—Allyson Nadia Field, author of Uplift Cinema: The Emergence of African American Film and the Possibility of Black Modernity

"Alix Beeston and Stefan Solomon's Incomplete exquisitely resists film studies scholarship's impulse to exalt 'whole' or 'complete' films. Instead, this impressive collection counsels us to recalibrate our understanding of incompleteness and fragmentation, attuning ourselves and the field of cinema and media studies to the radical possibilities of unfinished film projects. A model of feminist film scholarship, Incomplete's ingenious essays offer compelling accounts, deft theoretical pivots, and innovative approaches to women's film production, consumption, circulation, and authorship. An outstanding work, this collection is required reading for scholars of film history."—Samantha N. Sheppard, author of Sporting Blackness: Race, Embodiment, and Critical Muscle Memory on Screen


"This fascinating book demonstrates the connection between feminism and film history as necessarily incomplete projects. The editors' brilliant concept is beautifully brought to fruition, if not completion, by the book's contributors, whose insights will set up sparks of continuing inquiry in its readers—which deserve to be many."—Patricia White, author of Women's Cinema, World Cinema: Projecting Contemporary Feminisms
Read More >