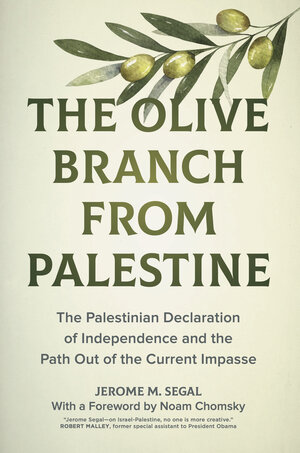 The Olive Branch from Palestine provides a new narrative of the Palestinian effort to end the Israeli-Palestinian conflict and offers a bold plan for ending this conflict today, a proposal that focuses on Palestinian agency and the power of the Palestinians to bring about the two-state solution, even in the absence of a fully committed Israeli partner.

In part 1, Jerome Segal provides an analytical and historical study of the 1988 Palestinian Declaration of Independence, a remarkable act of unilateral peacemaking through which the PLO accepted the legitimacy of the 1947 Partition Resolution and thereby redefined Palestinian nationalism. In part 2, he proposes a new strategy in which, outside of negotiations, the Palestinians would advance, in full detail, the end-of-claims/end-of-conflict peace plan they are prepared to sign, one that powerfully addresses the Palestinian refugee question and is supported by the refugees themselves yet does not undermine Israel as a Jewish-majority state.

Jerome M. Segal, an American philosopher whose writings in 1988 were a catalyst for the Palestinian Declaration of Independence, is author of Creating the Palestinian State and coauthor of Negotiating Jerusalem. He is internationally known as one of the most innovative conflict-resolution practitioners.

"Segal's carefully argued and highly informative study is centered on an original strategy that he had devised, a strategy implemented by Palestinian leadership but only partially, so that its feasibility remains untested. I have followed these matters closely for a long time, but Segal's account contains a good deal that was new to me."—Noam Chomsky

"Segal's thoughtful engagement in the formative days of the PLP's pursuit of Palestinian statehood provides him with uniquely relevant insights regarding the Israeli-Palestinian conflict and thought-provoking suggestions regarding its resolution."—Ofer Zalzberg, Middle East Program Director, Herbert C. Kelman Institute for Interactive Conflict Transformation

"Segal offers a firsthand historical account of some behind-the-scenes moves that shed light on the evolution of the Palestinians' struggle for independence. Very few scholars have been more creative in offering strategies for moving forward on an elusive peace. This book is a major contribution to understanding important aspects of the Arab-Israeli conflict."—Marwan Muasher, Vice President for Studies, Middle East Program, Carnegie Endowment for International Peace, and former foreign minister of Jordan


"Probably one of the most creative minds offering much-needed novel avenues for resolving a seemingly intractable conflict. That such stirring and feasible ideas are not fully appreciated is a sad commentary on the sterile policies of recent decades and those who endorse them."—Hussein Agha, coauthor of A Framework for a Palestinian National Security Doctrine

"Today, Israelis and Palestinians are stuck in a 'post-Oslo paralysis', with no prospects or path on the horizon for a resolution of the Israeli-Palestinian conflict. Segal describes the 1988 Palestinian Declaration of Independence as a game-changing act of 'unilateral peace-making,' and proposes that it serve as a model for a new Palestinian initiative to break the current impasse. The Olive Branch from Palestine is a book that everyone concerned with the quest for a resolution of the conflict, for the sake of both Israelis and Palestinians, should read."—Hillel Schenker, coeditor of Palestine-Israel Journal

"Jerome Segal inspired the thinking of the Independence Declaration. In The Olive Branch from Palestine, he not only provides a historical account and extended commentary about the conflict and the problems and strategies of achieving resolution, but he also proposes a strategy for exiting from the current impasse. I strongly recommend this book for anyone who wants to read a fair intellectual and political review of the Palestinian-Israeli state of relations which led us to where we are today."—Ziad AbuZayyad, coeditor of Palestine-Israel Journal, and former Palestinian Authority minister of state and legislator

"Jerome Segal has written a remarkable and deeply insightful account of the impasse between Israel and the Palestinians living under occupation since 1967. His uncommonly clear-headed and profoundly honest account allows him to map out a plausible and sophisticated proposal for these two embattled people to craft a modus vivendi based on self-determination for both communities. Identifying realistic paths out of the quicksand of conflict is exactly the task facing scholars and peace-seekers under the present and extremely discouraging realities. This is a work of impressive erudition, realistic appraisals, and, above all, real hope."—Hussein Ibish, Senior Resident Scholar, Arab Gulf States Institute in Washington
Read More >

Conclusion: The Significance of the Declaration