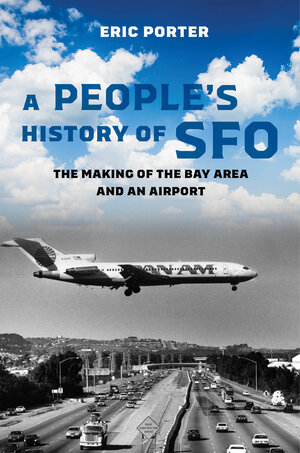 An illuminating profile of the San Francisco Bay Area, and its regional and global influence, as seen from the focal point of San Francisco International Airport (SFO).

A People's History of SFO uses the history of San Francisco International Airport (SFO) to tell a multifaceted story of development, encounter, and power in the surrounding region from the eighteenth century to the present. In lively, engaging stories, Eric Porter reveals SFO's unique role in the San Francisco Bay Area's growth as a globally connected hub of commerce, technology innovation, and political, economic, and social influence.

Starting with the very land SFO was built on, A People's History of SFO sees the airport as a microcosm of the forces at work in the Bay Area—from its colonial history and early role in trade, mining, and agriculture to the economic growth, social sanctuary, and environmental transformations of the twentieth century. In ways both material and symbolic, small human acts have overlapped with evolving systems of power to create this bustling metropolis. A People's History of SFO ends by addressing the climate crisis, as sea levels rise and threaten SFO itself on the edge of San Francisco Bay.

By Eric Porter, author of A People’s History of SFO: The Making of the Bay Area and an Airport For many people, airports may seem like alienating “nonplaces”—as anthropologist Marc Augé put …

Eric Porter is Professor of History, History of Consciousness, and Critical Race and Ethnic Studies at the University of California, Santa Cruz.

"Inside the airport, you can’t literally see the past. Still, you might be able to commune with it when you read Eric Porter’s new lively book."—San Francisco Examiner

"A People's History of SFO is a must-read for students and scholars of urban history—and for anyone who has ever trekked through an airport terminal. In tracing the development of San Francisco International Airport, Eric Porter strikes an ideal balance between a broad view of regional development and a finely detailed evaluation of how Black activists, suburban homeowners, local policy makers, and visual artists interpreted SFO as both a mirror that reflected the Bay Area and a hammer with which to shape their distinct urban visions. I know of no other book that explores as wide a range of subjects with as great an attention to detail."—Daniel Widener, Professor of History, University of California, San Diego

"With A People's History of SFO, Porter delivers a rich and dynamic history of the San Francisco Bay Area and an inclusive account of airports as agents of empire and modernity."—Eric Avila, author of The Folklore of the Freeway: Race and Revolt in the Modernist City

"A People's History of SFO situates the airport in entangled ecologies of social justice, racial capital, and globalizing city and environmental processes. Newly engaging the airport as a vital site where struggles for justice play out in complex and contradictory ways, Porter indicates its importance for both deep histories and uncertain futures."—Marina Peterson, author of Atmospheric Noise: The Indefinite Urbanism of Los Angeles


"An innovative, wide-ranging study of the San Francisco International Airport, A People's History of SFO illuminates not only the history of the Bay Area, but the complicated international flow of travel, migration, and imperial relationships that connect the region to a world far beyond its borders. Attuned to everything from how SFO transformed the salt marsh and tidelands on which it was built, to its history as a site of immigration, activism, labor struggles, government-funded infrastructure development, corporate air commerce, and public art, Porter's book suggests we cannot begin to fully understand the networked character of modern life without learning more about airports."—Mia Bay, author of Traveling Black: A Story of Race and Resistance

"We tend to think of airports as spaces we pass through, culturally and geographically peripheral to the cities they serve. Porter shows us, however, that SFO is a place with a history, shaped by the same forces as the rest of the Bay Area and beyond. In this fascinating book, the airport is not the conduit—it's the destination."—Natalia Molina, author of A Place at the Nayarit: How a Mexican Restaurant Nourished a Community
Read More >

Introduction: Three Views of SFO
1. Out of the Mud
2. Making San Francisco Airport
3. Of Fighting Planes and Flowers
4. A Black Future in the Air Industry?
5. The Politics of Jet Noise
6. Differing Degrees of Welcome
7. Sanctuary’s Gateway
8. Shoreline Futures