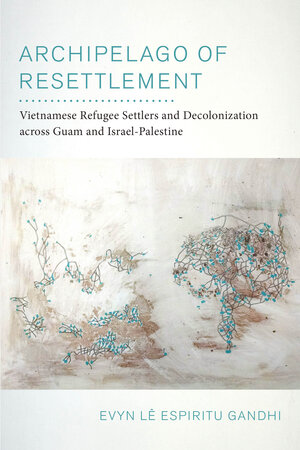 What happens when refugees encounter Indigenous sovereignty struggles in the countries of their resettlement?

From April to November 1975, the US military processed over 112,000 Vietnamese refugees on the unincorporated territory of Guam; from 1977 to 1979, the State of Israel granted asylum and citizenship to 366 non-Jewish Vietnamese refugees. Archipelago of Resettlement analyzes these two cases to theorize what Gandhi calls the refugee settler condition: the fraught positionality of refugee subjects whose resettlement in a settler colonial state is predicated upon the unjust dispossession of an Indigenous population. This groundbreaking book traces two forms of critical geography: first, archipelagos of empire, examining how the Vietnam War is linked to the US military build-up in Guam and unwavering support of Israel, and second, corresponding archipelagos of resistance, tracing how Chamorro decolonization efforts and Palestinian liberation struggles are connected by through the Vietnamese refugee figure. Thinking through distinct yet overlapping modalities of refugee and Indigenous displacement, Gandhi offers tools for imagining emergent forms of decolonial solidarity between refugee settlers and Indigenous peoples.