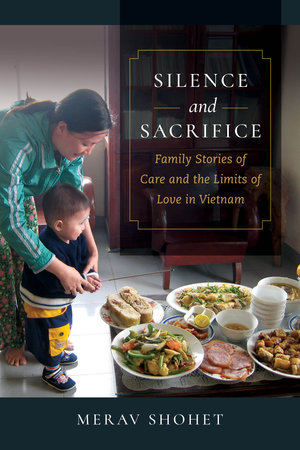 How do families remain close when turbulent forces threaten to tear them apart? In this groundbreaking book based on more than a decade of research set in Vietnam, Merav Shohet explores what happens across generations to families that survive imperialism, war, and massive political and economic upheaval. Placing personal sacrifice at the center of her story, Shohet recounts vivid experiences of conflict, love, and loss. In doing so, her work challenges the idea that sacrifice is merely a blood-filled religious ritual or patriotic act. Today, domestic sacrifices—made largely by women—precariously knot family members together by silencing suffering and naturalizing cross-cutting gender, age, class, and political hierarchies. In rethinking ordinary ethics, this intimate ethnography reveals how quotidian acts of sacrifice help family members forge a sense of continuity in the face of trauma and decades of dramatic change.

Merav Shohet is Assistant Professor of Anthropology at Boston University.

"Shohet’s study responds to a single question: What holds families together despite the strain of a century of turbulent conflict and inequities stemming from liberalizing economic reform? Her chapters answer this question by focusing on three interrelated principles that sustain family connections in the midst of radical change: love, sacrifice, and asymmetrical reciprocity. She examines these concepts in five chapters that reveal, on the one hand, how individual, familial, and national sacrifices are mutually intertwined and can even dovetail. On the other hand, sacrifice for love can also enforce silences and cause conflicts—ideas that Shohet reveals through stunningly intimate portrayals of family relations."

"Silence and Sacrifice is that rare book that is both theoretically exciting and beautifully written. Telling unforgettable stories of Vietnamese families who have managed to maintain ties despite the legacy of war, Merav Shohet makes critical contributions to anthropological conversations about ethics, affect, continuity, and change. Silence and Sacrifice is a real achievement."––Ayala Fader, author of Hidden Heretics: Jewish Doubt in the Digital Age

"The language of sacrifice (hy sinh) pervades the heroic symbolism of Vietnamese nationalism, but the state holds no monopoly on the legitimate use of sacrifice. Shohet’s moving family portraits show how everyday acts of sacrifice produce ethical and virtuous social persons and families disciplined by respect, care, and intergenerational love."––Erik Harms, author of Luxury and Rubble: Civility and Dispossession in the New Saigon

List of Illustrations
Acknowledgments
Notes on Vietnamese and Transcription Conventions

Prologue: Landing
Introduction: Vietnam Is a Country, Not a War

Part I. Sustaining National and Family Sacrifice
1. "Not only those on the battlefield": (Extra)Ordinary Sacrifice
2. Rituals and Routines of Sacrifice: Respect Those Above, Yield to Those Below
3. Troubling Love: Models for Gender (In)Equality?

Part II. Care Narratives and the Limits of Love
4. Waiting as Care? Sacrifice and Tình Cảm in Troubled Times
5. Children and Lovers: Marriage, Morality, and Motherhood