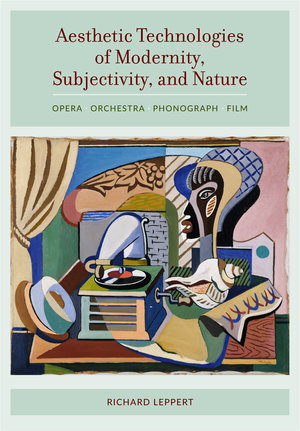 Virginia Woolf famously claimed that, around December 1910, human character changed. Aesthetic Technologies addresses how music (especially opera), the phonograph, and film served as cultural agents facilitating the many extraordinary social, artistic, and cultural shifts that characterized the new century and much of what followed long thereafter, even to the present. Three tropes are central: the tensions and traumas—cultural, social, and personal—associated with modernity; changes in human subjectivity and its engagement and representation in music and film; and the more general societal impact of modern media, sound recording (the development of the phonograph in particular), and the critical role played by early-century opera recording. A principal focus of the book is the conflicted relationship in Western modernity to nature, particularly as nature is perceived in opposition to culture and articulated through music, film, and sound as agents of fundamental, sometimes shocking transformation. The book considers the sound/vision world of modernity filtered through the lens of aesthetic modernism and rapid technological change, and the impact of both, experienced with the prescient sense that there could be no turning back.

Richard Leppert is Regents Professor of Cultural Studies at the University of Minnesota. He is the author of many books, including The Sight of Sound: Music, Representation, and the History of the Body and Art and the Committed Eye; he is also the editor of Adorno’s Essays on Music and coeditor of Beyond the Soundtrack.

"Richard Leppert’s book is a tour de force that marries the cultural history of opera and film with the technological history of modern media and sound technology in order to tackle fundamental questions about art in the age of modernity and our relationship to it."—Music & Letters

"In his brilliant new book, Richard Leppert examines the nexus of sound recording, opera, and film in the emergence of twentieth-century modernity and its subjectivities. Whether focusing on Puccini's La fanciulla del West or the films of Terrence Malick, he finds unexpected tensions between the aspirations, pleasures, and traumas of the last hundred years. Only someone equally versed in music, cinema, and cultural theory could have produced such a feast."—Susan McClary, 1995 MacArthur Fellow; author of Desire and Pleasure in Seventeenth-Century Music

"Leppert traces modernity's attempts to recover or reimagine a redemptive Nature in a series of works that span the twentieth century. Boldly confronting their modes of production and reproduction as exemplifying a Technology that seems to oppose the natural, and also straddling the 'great divide' between high and mass cultural forms, his study marries taut critical theory with generous celebration of the music, operas, and films with which it deals. It brilliantly manages to unite ecological, philosophical, and political themes in an interdisciplinary fashion that is profound and provocative."—Peter Franklin, author of Seeing through Music: Gender and Modernism in Classic Hollywood Film Scores and Reclaiming Late-Romantic Music: Singing Devils and Distant Sounds


"Any book by Richard Leppert is a major intellectual event, but this one is especially indispensable at a time when our core conceptions of nature and technology have never been more important or more contested. Aesthetic Technologies writes the modern pre-history of our current condition, with all the breadth of learning and clarity of expression at the command of its author, who is unsurpassed in both. Not since Friedrich Kittler's Gramophone Film Typewriter has there been a book this important on the links between media and subjectivity. And not since, well, ever, has anyone shown how foundational music and the technologies of its delivery have been to the proliferation of those links. The details are fascinating; the argument is compelling. Read this book."—Lawrence Kramer, author of The Thought of Music and Expression and Truth
Read More >

PART I. MODERNITY AND OPERA; NATURE AND REDEMPTION
1. The Civilizing Process: Music and the Aesthetics of Time-Space Relations in The Girl of the Golden West
2. Opera, Aesthetic Violence, and the Imposition of Modernity: Fitzcarraldo

PART II. VOICING SUBJECTIVITY
EXCURSUS: OPERA, MONUMENTALITY, AND LOOKING AT LOOKING
3. Caruso, Phonography, and Operatic Fidelities: Regimes of Musical Listening, 1904–1929
4. Aesthetic Meanderings of the Sonic Psyche: Three Operas, Two Notes, and One Ending at the Boundary of the Great Divide