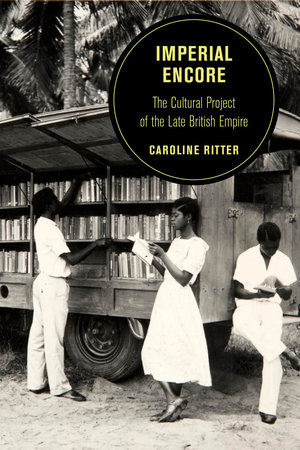 Imperial Encore The Cultural Project of the Late British Empire

In the 1930s, British colonial officials introduced drama performances, broadcasting services, and publication bureaus into Africa under the rubric of colonial development. They used theater, radio, and mass-produced books to spread British values and the English language across the continent. This project proved remarkably resilient: well after the end of Britain’s imperial rule, many of its cultural institutions remained in place. Through the 1960s and 1970s, African audiences continued to attend Shakespeare performances and listen to the BBC, while African governments adopted English-language textbooks produced by metropolitan publishing houses.

Imperial Encore traces British drama, broadcasting, and publishing in Africa between the 1930s and the 1980s—the half century spanning the end of British colonial rule and the outset of African national rule. Caroline Ritter shows how three major cultural institutions—the British Council, the BBC, and Oxford University Press—integrated their work with British imperial aims, and continued this project well after the end of formal British rule. Tracing these institutions and the media they produced through the tumultuous period of decolonization and its aftermath, Ritter offers the first account of the global footprint of British cultural imperialism.

"Imperial Encore presents a deeply-researched and engaging narrative that actively enriches a subject that has for too long been pushed to the outside of imperial historiography."

"More than any previous historian, Caroline Ritter lays bare the extent—and ambiguities—of the British cultural project in late colonial and postcolonial Africa. Through case studies of the BBC, British publishing, and the British Council, she shows how a British cultural imperialism underpinned by a common and enduring conviction in the value of British Culture, and, in more practical ways, by colonial development, intensified during decolonisation. As Ritter recounts in this rich and highly perceptive account, by adopting African actors, and absorbing postcolonial critiques to create a more inclusive form of Britishness, this cultural project evolved and flourished after the end of empire."—Sarah Stockwell, author of The British End of the British Empire

"Imperial Encore, the product of patient and painstaking research in diverse archives and media in Britain and East and West Africa, asks a compelling question: what was the place of British culture in the African postcolony? As Ritter ably demonstrates, this is a story of ambivalence, about the mysteries of taste, and why we love the things we love. Offering a cacophony of British and African voices on the question of what constituted African (or, for that matter, British) culture, Ritter takes us from performances of Macbeth in Lagos to the scramble for African authors at Oxford University Press. In Ritter's hands, this is no simple or straightforward story of 'translation,' but a much more complex project concerned with dynamics of cultural power that outlasted political colonial rule, and questions of how we assign value that are still with us today. Ritter's careful study poses bigger questions about the historical inequalities that structure acts of reading, seeing, and hearing."—Jordanna Bailkin, author of The Afterlife of Empire


"In Imperial Encore, Ritter brings a fresh and dynamic approach to late-imperial and post-colonial cultural relationships between Britain and Africa. This book is beautifully written, full of rich and interesting material, based on painstaking archival research across many collections and countries. The focus on drama, publishing, and broadcasting takes the cultural products of empire and post-empire seriously and develops a nuanced and rich exploration of the tensions and opportunities in these media in this period. By tracking the story from the 1930s all the way to the 1980s, the book effectively highlights the continuity, as well as the sometimes dramatic change, inherent to the late colonial and post-colonial period. This book is a rigorous and innovative contribution to New Imperial History and the current flourishing field of decolonisation and British decolonising history."—Charlotte Lydia Riley, Lecturer in British Twentieth Century History, University of Southampton
Read More >

PART ONE. Cultural Imperialism during the Late Empire
1. Shakespeare in Africa: The British Council and Drama Export
2. "Bringing Books to Africans": Publishing in Colonial East Africa
3. "This Is London . . .": BBC Broadcasting to Colonial Africa