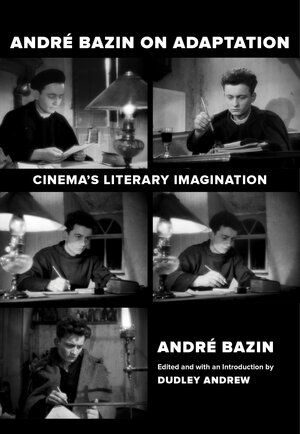 Recommend to Your Library (PDF) Rights and Permissions

Adaptation was central to André Bazin’s lifelong query: What is cinema? Placing films alongside literature allowed him to identify the aesthetic and sociological distinctiveness of each medium. More importantly, it helped him wage his campaign for a modern conception of cinema, one that owed a great deal to developments in the novel. The critical genius of one of the greatest film and cultural critics of the twentieth century is on full display in this collection, in which readers are introduced to Bazin's foundational concepts of the relationship between film and literary adaptation. Expertly curated and with an introduction by celebrated film scholar Dudley Andrew, the book begins with a selection of essays that show Bazin’s film theory in action, followed by reviews of films adapted from renowned novels of the day (Conrad, Hemingway, Steinbeck, Colette, Sagan, Duras, and others) as well as classic novels of the nineteenth century (Bronte, Melville, Tolstoy, Balzac, Hugo, Zola, Stendhal, and more). As a bonus, two hundred and fifty years of French fiction are put into play as Bazin assesses adaptation after adaptation to determine what is at stake for culture, for literature, and especially for cinema. This volume will be an indispensable resource for anyone interested in literary adaptation, authorship, classical film theory, French film history, and André Bazin’s criticism.

Dudley Andrew, Professor Emeritus of Comparative Literature and of Film Studies at Yale University, is biographer of André Bazin, whose ideas he extends in What Cinema Is! and Opening Bazin. With two books on 1930s French Cinema, Andrew was named Commandeur de l’Ordre des Arts et des Lettres. He is a member of the American Academy of Arts and Sciences.

"These essays on literature and cinema transport us to a time when French ciné-clubs, specialized magazines, and filmmaker-theorists created new thinking about movies and the world. André Bazin’s writing, beautifully orchestrated by Dudley Andrew, can be read as the intellectual sequel to Walter Benjamin's cultural critique of the 1930s."—Alice Kaplan, author of Dreaming in French: The Paris Years of Jacqueline Bouvier Kennedy, Susan Sontag, and Angela Davis

"For anyone who believes cinema is literature by another means—a conceit that is often (if not exclusively) French—this collection of literary film criticism by the great André Bazin is a veritable bounty, and Dudley Andrew is the ideal person to bring it to us."—Jonathan Rosenbaum, author of Cinematic Encounters

“Long recognized as one of the most important voices in classical films theory, André Bazin has also been one of the most incisive and original writers about adaptation theory and practice. Fortunately, those always subtle and insightful essays are now available in this ranging and balanced collection of well-known and not-so-well-known translations of Bazin's sustained reflections on the relations of film, literature, and the other arts. Also fortunately, the editor and guide for this work is Dudley Andrew, the most devoted and knowledgeable Bazin scholar in English.”—Timothy Corrigan, author of The Essay Film


"This is a great volume that presents consequential but sometimes little-known writings by Bazin to an American audience. Any translation of Bazin is a major event for the field, and this one presents an absolutely key area of Bazin’s thinking."—Dana Polan, author of Dreams of Flight: The Great Escape in American Film and Culture
Read More >