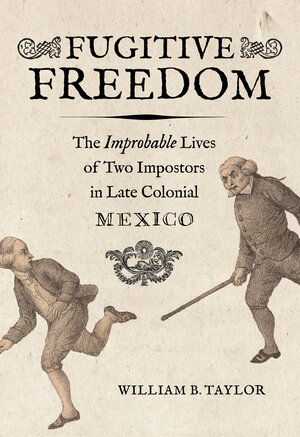 Cut loose from their ancestral communities by wars, natural disasters, and the great systemic changes of an expanding Europe, vagabond strangers and others out of place found their way through the turbulent history of early modern Spain and Spanish America. As shadowy characters inspiring deep suspicion, fascination, and sometimes charity, they prompted a stream of decrees and administrative measures that treated them as nameless threats to good order and public morals. The vagabonds and impostors of colonial Mexico are as elusive in the written record as they were on the ground, and the administrative record offers little more than commonplaces about them. Fugitive Freedom locates two of these suspect strangers, Joseph Aguayo and Juan Atondo, both priest impersonators and petty villains in central Mexico during the last years of Spanish rule.

Displacement brought pícaros to the forefront of Spanish literature and popular culture—a protean assortment of low life characters, seen as treacherous but not usually violent, shadowed by poverty, on the move and on the make in selfish, sometimes clever ways as they navigated a hostile, sinful world. What to make of the lives and longings of Aguayo and Atondo, which resemble those of one or another literary pícaro? Did they imagine themselves in literary terms, as heroes of a certain kind of story? Could impostors like these have become fixtures in everyday life with neither a receptive audience nor permissive institutions? With Fugitive Freedom, William B. Taylor provides a rare opportunity to examine the social histories and inner lives of two individuals at the margins of an unfinished colonial order that was coming apart even as it was coming together.

By William B. Taylor, author of Fugitive Freedom: The Improbable Lives of Two Impostors in Late Colonial Mexico I didn’t plan to write Fugitive Freedom. This was partly because the project that …

William B. Taylor is Muriel McKevitt Sonne Professor of History, Emeritus, at the University of California, Berkeley. His books on Latin American history include Theater of a Thousand Wonders: A History of Miraculous Images and Shrines in New Spain, as well as Drinking, Homicide, and Rebellion in Colonial Mexican Villages and Magistrates of the Sacred: Priests and Parishioners in Eighteenth-Century Mexico.

"In Fugitive Freedom, William B. Taylor—the master of historical writing on colonial Mexico—shows how the charlatan lives of two Mexican men from the social margins unmask much more than a plebeian, pícaro underworld in New Spain. The vagrant hearts, lies, and impersonations of the two tricksters and the punishments they endured show how Spanish rule in the Americas, with its Inquisition, state managers, and widespread inequalities, was failing and flourishing at the same time."––Davíd Carrasco, Neil L. Rudenstine Professor for the Study of Latin America, Harvard Divinity School

"Erudite and empathetic in equal measure, Fugitive Freedom challenges us to rethink our understanding of late colonial Mexico. Taylor’s meticulous reconstruction of the hidden worlds of two outcasts—both priest impersonators—reveals not only their fragmented and marginalized lives but also the fractures and chasms in the edifice of the Spanish empire more broadly. It is a stunning work of historical scholarship."––Susan Deans-Smith, Associate Professor of History, University of Texas at Austin

Strangers in the Land: Prosperity, Poverty, Expansion, and Displacement in Spain and New Spain
A World of Appearances and Suspicion
Two Impostors
The Mexican Inquisition after 1750

1 Joseph Lucas Aguayo y Herrera, Escape Artist
A Life on His Own and on the Move: "I left determined to make my way in life . . . for good or ill"
Aguayo Presents Himself: Reading His Actions and Words: ". . . leaving nothing behind but my shadow"
Inquisitors Take the Measure of Joseph Aguayo: "An escaped criminal and backslider"
Conclusion: "What I tell you is either truth or lies"

2 Juan Atondo's Vagrant Heart
Aspirations and Transgressions
Atondo Presents Himself to the Inquisition
The Inquisitors and Others Appraise Juan Atondo
Conclusion: His Propensión Religiosa

4 Aguayo and Atondo, Pícaros After All?
Aguayo: "The pícaro both incorporates and transcends the wanderer, the jester, and the have-not."
Atondo: "You are the stranger who gets stranger by the hour"
Conclusion