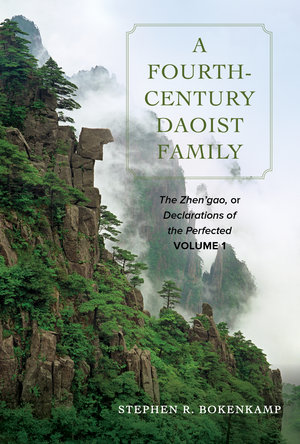 A Fourth-Century Daoist Family The Zhen’gao or Declarations of the Perfected, Volume 1

This volume is the first in a series of full-length English translations from one of the foremost classics in Daoist religious literature, the Zhen gao or Declarations of the Perfected. The Declarations is a collection of poems, accounts of the dead, instructions, and meditation methods received by the Daoist Yang Xi (330–ca. 386) from celestial beings and shared by him with his patrons and students. These fragments of revealed material were collected and annotated by the eminent scholar and Daoist Tao Hongjing (456–536), allowing us access to these distant worlds and unfamiliar strategies of self-perfection. Bokenkamp's full translation highlights the literary nature of Daoist revelation and the Declarations’s place in the development of Chinese letters. It further details interactions with the Chinese throne and the aristocracy and demonstrates ways that Buddhist borrowings helped shape Daoism much earlier than has been assumed. This first volume also contains heretofore unrecognized reconfiguration of Buddhist myth and practice that Yang Xi introduced to his Daoist audience.

Stephen R. Bokenkamp is Regents Professor of Chinese Religion at Arizona State University. He is the author of Early Daoist Scriptures and Ancestors and Anxiety and is the recipient of a Guggenheim Fellowship and a National Endowment for the Humanities Translation grant.