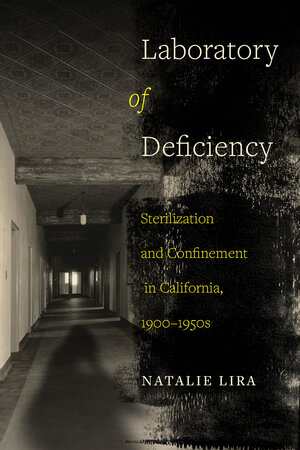 Laboratory of Deficiency Sterilization and Confinement in California, 1900–1950s

Pacific Colony, a Southern California institution established to care for the "feebleminded," justified the incarceration, sterilization, and forced mutilation of some of the most vulnerable members of society from the 1920s through the 1950s. Institutional records document the convergence of ableism and racism in Pacific Colony. Analyzing a vast archive, Natalie Lira reveals how political concerns over Mexican immigration—particularly ideas about the low intelligence, deviant sexuality, and inherent criminality of the "Mexican race"—shaped decisions regarding the treatment and reproductive future of Mexican-origin patients. Labaratory of Deficiency documents the ways Mexican-origin people sought out creative ways to resist institutional control and offers insight into the ways race, disability, and social deviance have been called upon to justify the confinement and reproductive constraint of certain individuals in the name of public health and progress.

Natalie Lira is Assistant Professor of Latina/Latino Studies at the University of Illinois at Urbana-Champaign.

"Highlights the devastating and disproportionate impact of the racialization, sexualization, and medicalization of Mexican-origin women in early twentieth century."—Miroslava Chávez-García, Professor of History at the University of California, Santa Barbara

"“Brilliantly conceived, researched, and organized.”—John Mckiernan-Gonzalez, Director of the Center for the Study of the Southwest, Texas State University