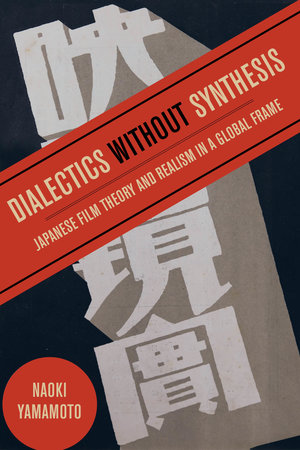 Dialectics without Synthesis explores Japan’s active but previously unrecognized participation in the global circulation of film theory during the first half of the twentieth century. Examining a variety of Japanese theorists working in the fields of film, literature, avant-garde art, Marxism, and philosophy, Naoki Yamamoto offers a new approach to cinematic realism as culturally conditioned articulations of the shifting relationship of film to the experience of modernity. In this study, long-held oppositions between realism and modernism, universalism and particularism, and most notably, the West and the non-West are challenged through a radical reconfiguration of the geopolitics of knowledge production and consumption.

Naoki Yamamoto is Assistant Professor of Film and Media Studies at the University of California, Santa Barbara.

"Dialectics without Synthesis is a valuable addition to film studies and should be of interest not only to Japanese film specialists but to film and media theorists more broadly."

—The Journal of Japanese Studies

"Exceptionally meticulous archival research, humanity-driven methodologies, and special attention to historical context. . . .Dialectics without Synthesis is a step forward toward a future in which the chasm between Western and non-Western theory is significantly narrowed."—The Velvet Light Trap

"Dialectics without Synthesis is a genealogical tour de force. Naoki Yamamoto’s focus on the two-fold, elliptical nature of cinematic realism allows him to address, in meticulous detail, the multifarious theoretical disputes waged across five decades of Japanese cinema, while tracing the contours of a singular mode of theorization. The result is a comprehensive survey of 'classical' Japanese film theory with a deftly conceptualized argument for its importance today. This is the book on Japanese film theory we students and teachers of global film theory have been waiting for."—Thomas Lamarre, author of The Anime Ecology: A Genealogy of Television, Animation, and Game Media


"Yamamoto has powerfully detonated the field of film theory by expanding it to include a surprising and potent Japanese discourse. Under his scrutiny, the terms realism, film, and even theory become duplicitous and nonconforming. Yet even if our dream of universal synthesis is shattered, he has given us a precious opportunity for a revision and reboot of the discipline."—Francesco Casetti, Yale University

"Yamamoto’s book is exemplary in its examination of the dynamics behind global and local forces shaping knowledge production. Dialectics without Synthesis will surely be essential reading in any course seeking to give a global account of the development of film theoretical discourses."—Masha Salazkina, author of In Excess: Sergei Eisenstein's Mexico.

"The questions 'What is Japanese film theory?' and the variation 'Is there such a thing as Japanese film theory?' have been raised by many Japanese film critics and intellectuals. This long-awaited and groundbreaking book demonstrates how theory can be built, reconstituted, and at times, dismantled retrospectively and retroactively through a contemporary author’s act of theorizing and historicizing a network of critical discourses."—Victor Fan, King’s College London