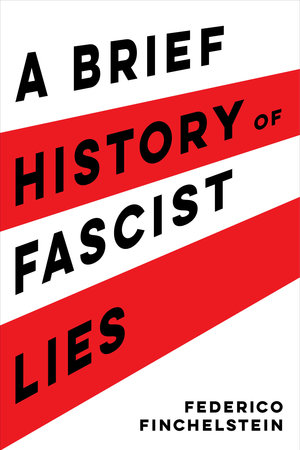 In this short companion to his book From Fascism to Populism in History, world-renowned historian Federico Finchelstein explains why fascists regarded simple and often hateful lies as truth, and why so many of their followers believed the falsehoods. Throughout the history of the twentieth century, many supporters of fascist ideologies regarded political lies as truth incarnated in their leader. From Hitler to Mussolini, fascist leaders capitalized on lies as the base of their power and popular sovereignty.

This history continues in the present, when lies again seem to increasingly replace empirical truth. Now that actual news is presented as “fake news” and false news becomes government policy, A Brief History of Fascist Lies urges us to remember that the current talk of “post-truth” has a long political and intellectual lineage that we cannot ignore.

Federico Finchelstein is Professor of History at the New School for Social Research and Eugene Lang College in New York City. He is the author of several books, including From Fascism to Populism in History, Transatlantic Fascism, and The Ideological Origins of the Dirty War. His books have been translated into many languages, including Spanish, Portuguese, Turkish, and Italian. He contributes to major American, European, and Latin American media, including the New York Times, the Washington Post, the Guardian, CNN, Foreign Policy, Clarín, Corriere della Sera, Nexos, and Folha de S.Paulo.

"There is no better book on fascism's complex and vexed relationship with truth."––Jason Stanley, author of How Fascism Works: The Politics of Us and Them

"Federico Finchelstein delivers a vital compendium on a dark seam running through our modern politics. This is not just a deft intellectual history of fascism, but an urgent reminder of the deep well of hate that lies beneath our era of 'alternative facts' and 'fake news.'"––Ishaan Tharoor, Washington Post

"At a time when politicians like Donald Trump and Jair Bolsonaro claim that information they don’t like is 'fake news,' Finchelstein's history of fascist lying strikes a chord. From Mussolini onward, truth is what the leader needs it to be."––Ruth Ben-Ghiat, Professor of Italian and History, New York University

"Finchelstein brings clarity and precision to the debate about the populist far right at a time when pundits across the globe casually throw around the term 'fascist' with little regard for its history or meaning. Ranging from Europe to the United States to Latin America, Finchelstein shows that dismissing contemporary xenophobic populists as insane swindlers does little to weaken or defeat them and merely allows them to keep winning by waging war on the truth."––Sasha Polakow-Suransky, Deputy Editor, Foreign Policy, and author of Go Back to Where You Came From: The Backlash against Immigration and the Fate of Western Democracy


"This excellent and timely book does exactly what its title promises. Finchelstein builds upon his well-established record of scholarship on fascism, populism, and authoritarianism, providing a modern history of political lies. He provides concrete historical answers to paradoxical understandings of lies, including one of the most perplexing, why fascists thought that lying serves the truth."––Benjamin C. Brower, Associate Professor of History at The University of Texas at Austin

"In this concise book the author offers an outstanding analysis on lying in politics, a theme very timely with "fake news" at the center of our debate on political communication. Here Finchelstein presents an original history of fascist ideology and the context of its diffusion that goes through Italy, Europe and Latin America."––Valeria Galimi, Professor of History, University of Florence
Read More >

Introduction
1. On Fascist Lies
2. Truth and Mythology in the History of Fascism
3. Fascism Incarnate
4. Enemies of the Truth?
5. Truth and Power
6. Revelations
7. The Fascist Unconscious
8. Fascism against Psychoanalysis
9. Democracy and Dictatorship
10. The Forces of Destruction
Epilogue: The Populist War against History