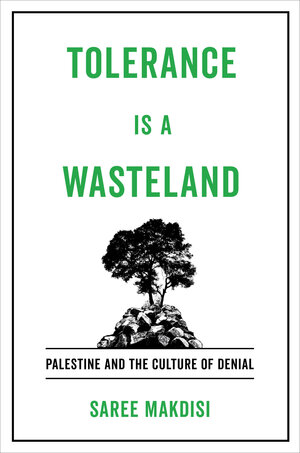 Tolerance Is a Wasteland Palestine and the Culture of Denial

How denial sustains the liberal imagination of a progressive and democratic Israel. The question that this book aims to answer might seem simple: how can a violent project of dispossession and discrimination be imagined, felt, and profoundly believed in as though it were the exact opposite––an embodiment of sustainability, multicultural tolerance, and democratic idealism? Despite well-documented evidence of racism and human rights abuse, Israel has long been embraced by the most liberal sectors of European and American society as a manifestation of the progressive values of tolerance, plurality, inclusivity, and democracy, and hence a project that can be passionately defended for its lofty ideals.

Tolerance Is a Wasteland argues that the key to this miraculous act of political alchemy is a very specific form of denial. Here the Palestinian presence in, and claim to, Palestine is not simply refused or covered up, but negated in such a way that the act of denial is itself denied. The effects of destruction and repression are reframed, inverted into affirmations of liberal virtues that can be passionately championed. In Tolerance Is a Wasteland, Saree Makdisi explores many such acts of affirmation and denial in a range of venues: from the haunted landscape of thickly planted forests covering the ruins of Palestinian villages forcibly depopulated in 1948; to the theater of "pinkwashing" as Israel presents itself to the world as a gay-friendly haven of cultural inclusion; to the so-called Museum of Tolerance being built on top of the ruins of a Muslim cemetery in Jerusalem, which was methodically desecrated in order to clear the space for this monument to "human dignity." Tolerance Is a Wasteland reveals the system of emotional investments and curated perceptions that makes this massive project of cognitive dissonance possible.

Saree Makdisi is Professor of English and Comparative Literature at UCLA. His previous books include Making England Western: Occidentalism, Race and Imperial Culture; Palestine Inside Out: An Everyday Occupation; and Reading William Blake.

"Tolerance Is a Wasteland exposes the deep contradictions between Israel's public image and the realities Palestinians experience every day. Its argument is searing and troubling––and anyone who cares about Israel-Palestine ignores it at their peril."—Peter Beinart, author of The Crisis of Zionism

"Writing here in the name of moral principles, Saree Makdisi shows how a struggle for freedom and justice on the part of Palestinians is overridden and dismissed, turned into a specter of destruction, and urges that the world must come together in its embrace of emancipation. His analyses are keen and persuasive, and he holds out for a future of justice where so many have understandably despaired. This book is a beacon of light, and we can only hope that it shines and shines."—Judith Butler, author of Precarious Life and The Force of Nonviolence

"How does a country hide ethnic cleansing and apartheid? Cover it in trees, rainbow flags, a settler state masquerading as a multiracial liberal democracy, a museum of 'tolerance,' and deny what's buried underneath or practiced in plain sight. As Makdisi shows in his latest masterpiece, the whitewashing, greenwashing, and pinkwashing of colonial violence taught liberals to stop worrying about Palestinians or international law and love Israel unconditionally. And it worked … until now. By peeling back seven decades of denial, Makdisi reveals a truth that is simply undeniable."—Robin D. G. Kelley, author of Freedom Dreams: The Black Radical Imagination


"In Tolerance Is a Wasteland, Makdisi takes a radical path through the denials of the Zionist state's mass killings—ethnic cleansing embedded in its constitutive racism. By centering the Museum of Tolerance, Makdisi exposes militarized tolerance while engaging the reader with what he frames brilliantly as 'the denial of denial.' This book, a thoughtful examination of moments of occlusion as denial, is a must-read. It eloquently troubles Zionist affirmation of the fetish, opening up the possibility of global ethics and/as counterpolitics."—Nadera Shalhoub-Kevorkian, author of Incarcerated Childhood and the Politics of Unchilding
Read More >