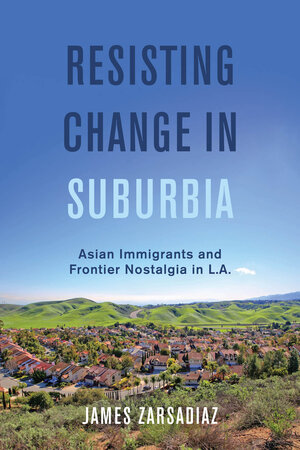 Between the 1980s and the first decade of the twenty-first century, Asian Americans in Los Angeles moved toward becoming a racial majority in the communities of the East San Gabriel Valley. By the late 1990s, their "model minority" status resulted in greater influence in local culture, neighborhood politics, and policies regarding the use of suburban space. In the "country living" subdivisions, which featured symbols of Western agrarianism including horse trails, ranch fencing, and Spanish colonial architecture, white homeowners encouraged assimilation and enacted policies suppressing unwanted "changes"—that is, increased density and influence of Asian culture. While some Asian suburbanites challenged whites' concerns, many others did not. Rather, white critics found support from affluent Asian homeowners who also wished to protect their class privilege and suburbia's conservative Anglocentric milieu. In Resisting Change in Suburbia, award-winning historian James Zarsadiaz explains how myths of suburbia, the American West, and the American Dream informed regional planning, suburban design, and ideas about race and belonging.

James Zarsadiaz is Associate Professor of History and Director of the Yuchengco Philippine Studies Program at the University of San Francisco.

"James Zarsadiaz brings a welcome corrective to how Americans still tend to think about suburbs as exclusive bastions of middle- and upper-class whiteness. While Zarsadiaz's primary interest is in how race informed 'country living' with regard to its association with whiteness and the threat that Asian immigrants represented, he also demonstrates deftly the ideal's persistence through the late twentieth century and that it expanded and adapted, appealing to non-whites and being repeatedly invoked in fights over growth and incorporation."—Shelley Lee, author of Koreatown, Los Angeles: Immigration, Race, and the "American Dream"

"This book sheds light on a dynamic that is fast transforming the landscape of California—large-scale suburbanization as it is driven by and responsive to Asian American immigration and settlement. Few scholars have been attentive to the ways that design and aesthetic sensibilities in suburbia have become racially charged the way that Zarsadiaz does in Resisting Change in Suburbia. This is an important contribution to the field of Asian American studies."—Robyn Rodriguez, coauthor of Asian America

"A nuanced and insightful study about the promise and perils of making a home in the suburbs, Resisting Change in Suburbia is a much-needed contribution to post-1965 immigration history, Asian American studies, and environmental studies. James Zarsadiaz explores how and why so many Asian Americans have claimed the East San Gabriel Valley suburbs as their home in the late twentieth and early twenty-first centuries. Based primarily on Zarsadiaz's analysis of oral histories that he conducted with suburban denizens, the book examines how myths about the American West and the American Dream coalesce to inform Asian residents' attraction to and creation of 'country living' in the suburbs in spite of the anti-Asian sentiments that accompany it."—Catherine Ceniza Choy, author of Asian American Histories of the United States

"This beautifully written history of Asian immigrants in the San Gabriel Valley of Los Angeles demonstrates how the reality of suburban diversity contradicts, and yet is also constrained by, the mythology of suburban whiteness and 'country living.' Zarsadiaz provides a sophisticated and complex account of how Asian suburbanites encountered racial prejudice, maintained ethnic customs, endorsed exclusionary policies, and adopted assimilationist strategies to achieve the American Dream in the shifting California landscape. A brilliant fusion of urban/suburban and cultural history, ethnographic methods, and Asian American studies."—Matthew Lassiter, Professor of History, University of Michigan

"James Zarsadiaz brilliantly demystifies Southern California's suburban landscapes and the globalization of the American Dream. Through unexpected twists and turns, he meticulously locates how immigrants diversify lifestyles and shift power, but also how they provide counternarratives to what it means to belong to a place, real and imagined."—Linda Trinh Vo, author of Mobilizing an Asian American Community