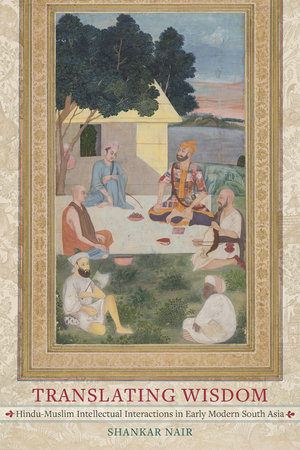 Published with the generous support of the Buckner W. Clay Dean of Arts & Sciences and the Vice President for Research at the University of Virginia.

During the height of Muslim power in Mughal South Asia, Hindu and Muslim scholars worked collaboratively to translate a large body of Hindu Sanskrit texts into the Persian language. Translating Wisdom reconstructs the intellectual processes and exchanges that underlay these translations. Using as a case study the 1597 Persian rendition of the Yoga-Vasistha—an influential Sanskrit philosophical tale whose popularity stretched across the subcontinent—Shankar Nair illustrates how these early modern Muslim and Hindu scholars drew upon their respective religious, philosophical, and literary traditions to forge a common vocabulary through which to understand one another. These scholars thus achieved, Nair argues, a nuanced cultural exchange and interreligious and cross-philosophical dialogue significant not only to South Asia’s past but also its present.

"Nair contributes to establishing a new model for what consequential scholarship on South Asia looks like. . . . Translating Wisdom will make a substantial contribution to the intellectual jet streams occupied by interested parties worldwide."—Journal of the American Academy of Religion

"Not every book on premodern India finds its theoretical inspiration in the jet stream! Shankar Nair examines a pivotal work of Mughal translation and shows how it channels huge vortexes of Islamic and Hindu intellectual culture. The result is a masterwork, and its own jet stream freshens the religious air we breathe today."—John Stratton Hawley, author of A Storm of Songs: India and the Idea of the Bhakti Movement

"Nair exhibits a breathtaking command of languages, textual traditions, and intellectual cultures in this pioneering study of the crisscrossing of Sanskrit, Persian, and Arabic cultural jet streams in sixteenth-century India. This immensely erudite book discovers philosophical ingenuity in the early modern translation of a Sanskrit metaphysical tale, the Laghu-Yoga-Vasistha, into Persian.”—Jonardon Ganeri, author of The Lost Age of Reason: Philosophy in Early Modern India 1450–1700

"This book is an erudite and valuable contribution to the history of ideas in South Asia. Nair's deep linguistic and philosophical expertise illuminates the writings of three important if overlooked seventeenth-century thinkers, and shows us how their intellectual worlds met through the Jug Basisht translation project.”—Supriya Gandhi, author of The Emperor Who Never Was: Dara Shukoh in Mughal India


"Translating Wisdom is a welcome addition to the history of Hindu and Islamic interactions in early modern India, highlighting the subtleties of translation and the painstaking creation of a vocabulary important for both religions. Showing how interreligious exchanges worked centuries ago, Nair sheds light too on how better to study religions today.”—Francis X. Clooney, Parkman Professor of Divinity, Harvard University

"Demonstrating how medieval Indian metaphysical teachings in Sanskrit were received, redacted, and refashioned by the Persian language against the backdrop of the Islamic intellectual tradition in early modern South Asia, this phenomenal study points to a truly unique moment in the history of cross-cultural translation and non-Western philosophy of religion."—Mohammed Rustom, author of The Triumph of Mercy: Philosophy and Scripture in Mulla Sadra
Read More >