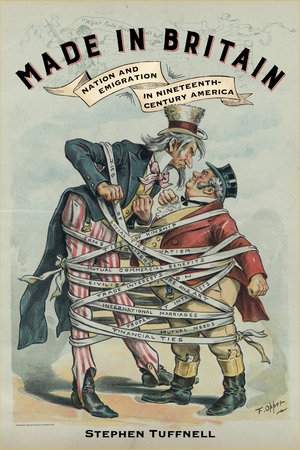 Made in Britain Nation and Emigration in Nineteenth-Century America

The United States was made in Britain. For over a hundred years following independence, a diverse and lively crowd of emigrant Americans left the United States for Britain. From Liverpool and London, they produced Atlantic capitalism and managed transfers of goods, culture, and capital that were integral to US nation-building. In British social clubs, emigrants forged relationships with elite Britons that were essential not only to tranquil transatlantic connections, but also to fighting southern slavery. As the United States descended into Civil War, emigrant Americans decisively shaped the Atlantic-wide battle for public opinion. Equally revered as informal ambassadors and feared as anti-republican contagions, these emigrants raised troubling questions about the relationship between nationhood, nationality, and foreign connection.

Blending the histories of foreign relations, capitalism, nation-formation, and transnational connection, Stephen Tuffnell compellingly demonstrates that the United States’ struggle toward independent nationhood was entangled at every step with the world’s most powerful empire of the time. With deep research and vivid detail, Made in Britain uncovers this hidden story and presents a bold new perspective on nineteenth-century trans-Atlantic relations.

How American Emigrants in Britain Defined the National Image

By Stephen Tuffnell, author of Made in Britain: Emigration and Nation in Nineteenth-Century America London’s underground map is now globally ubiquitous. Part electrical schematic, part Mondrian neo-plasticism it is perhaps one of …

Stephen Tuffnell is Associate Professor of Modern US History at St. Peter's College, Oxford University. He is coeditor, with Dr. Benjamin Mountford, of A Global History of Gold Rushes.

"Stephen Tuffnell’s Made in Britain is a thorough, original and engaging account of the part played by American expats in the creation of transatlantic diplomacy in post-independence 19th-century Britain. The book––peppered with specific case studies, useful statistics and factual analyses, as well as compelling anecdotes––is both an enjoyable and instructive read."—Cercles

"Tuffnell’s study is fascinating as it stands. It is no criticism to say that it is fertile soil for future work that could extend the coverage of the expatriate community into culture and society."

“By focusing on elite American migrant communities within Britain, Stephen Tuffnell’s Made in Britain: Nation and Emigration in Nineteenth-Century America offers an innovative complement to the existing scholarship on the development of U.S. national identity.”

"Tuffnell has crafted a fantastic, well-researched, and highly readable volume on the interconnectedness of the Atlantic world in the nineteenth century. It highlights the ongoing postcolonial relationship between Britain and America and contributes to our understanding of the role of emigration and emigrant communities in shaping foreign relations."—H-Net

“Accessible to non-specialists yet appealing to an academic audience, this text could prove suitable for coffee shops or classrooms.”

"Made in Britain valuably contributes to the historiography of American foreign relations, the Civil War, and capitalism. Concise and well organized, this book encourages the study of a more global emigrant history because, as Tuffnell correctly suggests, ‘it took the world to produce the nation’."

—The Journal of American History

"Made in Britain is a deeply researched, analytically rich, and highly original contribution to our understanding of economic, political, and social relationships cultivated by Americans in Great Britain during the nineteenth-century. . . . I cannot recommend it strongly enough."

"Not only will students and scholars of British history profit by reading this book, but readers with general intellectual interests will likely become fascinated with both the specific topics Stansky discusses and the workings of a distinguished historian’s lively approach to his subject."

"This fascinating book offers a gripping account of how a former colony and an ascendant empire came to forge an enduring transimperial camaraderie. An intimate look at Americans living in England—from tourists to freed and fugitive slaves to diplomats—during the nineteenth century, Made in Britain weaves together such a large history out of smaller encounters from the high seas to high-class London clubs. In the decades after 1776, independence became interdependence!"—Daniel E. Bender, author of American Abyss: Savagery and Civilization in the Age of Industry

"Made in Britain is a wonderful testament to the virtues of transnational history. Readers interested in American foreign relations, the history of capitalism, and the Atlantic world all stand to benefit from Stephen Tuffnell's sophisticated and insightful book."—Brian Rouleau, author of With Sails Whitening Every Sea: Mariners and the Making of an American Maritime Empire

"Drawing on an impressive array of unusually strong primary sources, Tuffnell offers a brilliant analytical narrative that illuminates American cultural, social, economic, and political history. It also offers an exceptionally rich history of foreign relations, full of sectional and partisan complexity and busy with a broad cast of characters. It is the kind of work that makes one exclaim, why didn't someone think to do this before?!"—Matthew Mason, author of Slavery and Politics in the Early American Republic

"Emigration and expatriation from the United States have long been topics in need of a masterful historical synthesis. For the Anglo-American case in the nineteenth century, the phenomenon finds its ideal interpreter in Stephen Tuffnell. Written with supreme command of primary and secondary materials, Tuffnell's Made in Britain takes a difficult and fragmented subject. Focusing on American economic and social exchanges, Tuffnell gives the material shape and substance through the dialogue of emigrant American communities in Britain and their discussions of national identity and transnational connection. He shows how emigrants and expatriates served as transatlantic 'connectors' of the two nations and yet also contributed to the forging of U.S. nationalism. A triumph of a book."—Ian Tyrrell, author of Reforming the World: The Creation of America’s Moral Empire