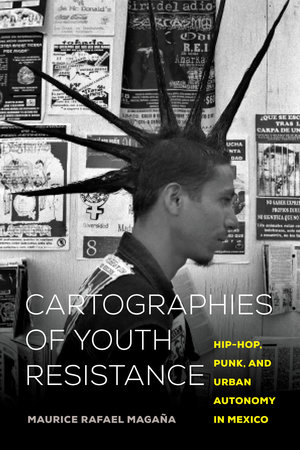 by Maurice Rafael Magaña, author of Cartographies of Youth Resistance: Hip-Hop, Punk, and Urban Autonomy in Mexico Despite the COVID-19 pandemic and global stay-at-home orders, 2020 has been a year of historic …

Maurice Rafael Magaña is a sociocultural anthropologist and Assistant Professor of Mexican American Studies at the University of Arizona.

"The book is an ethnographic treasure-trove. Rich in information, it sheds light on the complexity of local politics and social movements. More than anything else, it is the depth of Magaña’s analysis, capturing the youth’s interconnected understanding of race, politics, and subcultures, that makes this book a must-read for researchers of social movements in the Americas, and beyond."—Anthropology Book Forum

"Cartographies of Youth Resistance wraps trenchant analysis of how contemporary social movements keep energized and live through time, space, and repression with activist ethnography that keeps you turning the pages. Revealing the aesthetics, horizontal organizational strategies, and epistemologies behind one of the twenty-first century’s most creative social movements, Magaña vividly paints urban Indigenous and migrant youth as creators of new models of politics and culture that are crucial for our time."––Lynn Stephen, Philip H. Knight Chair and Distinguished Professor of Anthropology, University of Oregon and author of We are the Face of Oaxaca: Testimony and Social Movements

"This is a beautifully written book that analyzes the life and transformation of one social movement: youth activists in Oaxaca, Mexico, who cohered into a movement after the 2006 civil uprising in that city. Magaña's ethnography shows how this sector created a counter-space of resistance and autonomy in militarized neoliberal Mexico by drawing on a diverse repertoire, including punk and hip hop as well as indigenous customs, and then diminished in the following decade. An important contribution to the literature on social movements, indigeneity, art, urban politics, and neoliberalism."––Nancy Postero, author of The Indigenous State: Race, Politics, and Performance in Plurinational Bolivia


"With deep ethnographic research, keen political analysis, and fine aesthetic sensibilities, Magaña brings into sharp focus one of the most creative youth movements of recent times. Scholars and activists alike will be engaged by his compelling portrayal of the hybrid social movement expressions that have emerged in urban Oaxaca."––Edward J. McCaughan, author of Art and Social Movements: Cultural Politics in Mexico and Aztlán

"An extraordinary ethnographic window into the enduring afterlife of the 2006 Oaxacan social movement. Urban indigenous and migrant youth decolonized political and cultural space from below, with horizontal practices of 'comunalidad' and consensus, and a rebel aesthetics of music, murals, graffiti, and dance. These marginalized youth claimed Oaxaca back from picturesque 'heritage tourism,' enacting an inclusive, indigenous-based citizenship in the process. In Magaña's capable hands, we rightfully see these youths as transformative agents of urban geographies, the political future of a decolonized continent."––María Josefina Saldaña-Portillo, author of Indian Given: Racial Geographies across Mexico and the United States

"Cartographies of Youth Resistance a provides an intense and informed analysis of how youth in Oaxaca utilize performance venues and networks of associations to organize and carry out continuous revolutionary actions that burst through artistic expressions. The seeming quiet resulting from repression is constantly challenged by performative discontent, and we can begin to fully understand how this activism will never cease nor be defeated."––Carlos G. Vélez-Ibáñez, author of Reflections of a Transborder Anthropologist: From Netzahualcóyotl to Aztlán